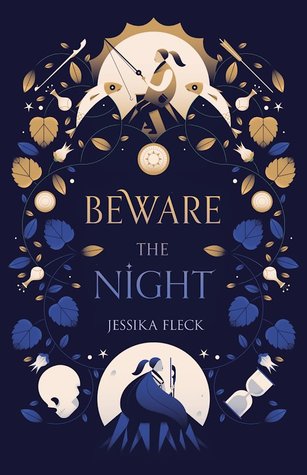 Beware the Night by Jessika Fleck
My rating: 2 of 5 stars

When her world divides, pitting light against dark, Veda must join a dangerous revolution to save her grandfather and fight against injustice…even if it costs her the boy she loves.

On the island of Bellona, life is peaceful–as long as the citizens dutifully worship the Sun, which protects them from all harm. Seventeen-year-old Veda knows that keeping the Sun happy will protect her and her grandfather from the Night, the dangerous people who snatch innocent citizens from their beds under the cover of darkness, never to be seen again. As long as Veda follows the rules, she will be safe.

But when Veda’s grandfather is offered up as the next sacrificial offering to keep the Sun’s favor, she starts to see that the safety she’s been promised comes at a dangerous price. Maybe there is more to fear above than there is below.

With a mysterious young man, Dorian, at her side, Veda has to figure out if the scary bedtime stories she grew up hearing are real–or dangerous lies.

The story is about a girl, Veda, living in a sun-worshipping culture, and being told that the moon-worshippers, called the Night, are heathens and monsters, and then finding out that she might the prophesied leader of the Night. Her break from the sun-worshippers happens after her grandfather is up for the next round of human sacrifices to the Sun. Now Veda goes from fearing the Night to wanting to fight the Imperi (the sun guards), practically overnight – a switch which would have been believable if the Night weren’t portrayed like real monsters at the start. The plot overall feels like a generic dystopia with mythology element, to be honest. Rebel girl with her heart divided between two boys and her cause in an insufferable love triangle. Like, I couldn’t deal with the extreme horniness going on; it is also pretty much insta-love so nope from me.

About the plot, well, I was frustrated with how much of Nothing happens in the book. Veda makes silly decisions and she never follows through. Her getting caught by the Imperi was so stupid I laughed! Also, who doesn’t lie to hide something from her? The truth about her family is a shocker but I couldn’t feel any emotional weight behind it. In fact, I didn’t feel emotionally connected to this book on any level. I had the sequel ready to go after reading this, but honestly I am more inclined to just drop it altogether because I doubt I will be satisfied by this series.