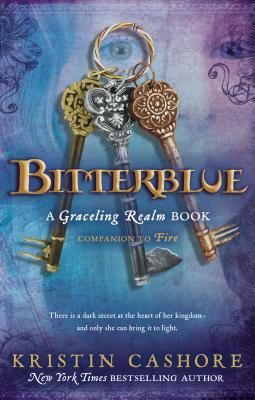 Bitterblue by Kristin Cashore
My rating: 4 of 5 stars

When Queen Bitterblue took the throne of Monsea, she was a child, and her advisers ran the kngdom for her. Now she is beginning to question their decisions, especially how they handle the legacy of her father Leck, who who ruled through his Grace–a special talent for mind-altering–and his taste for darkness and violence. Bitterblue needs to know Monsea’s past to lead it into the future, so she begins exploring the city sreets at night, disguised and alone. As she does, she meets two thieves, who hold a key to the truth of Leck’s reign. And one of them, with a Grace that he hasn’t yet identified, holds a key to her heart.

Bitterblue is different from the other two novels in the Graceling Realm series in that it is not an action-adventure or a spycraft-themed novel, and is instead a mystery book of sorts that is themed on recovering from trauma. While you didn’t need to read Graceling to read Fire, you need to read both of them to get into this book. It takes place 8 years after the events of Graceling, and Bitterblue, who has been reigning since then with the help of her four advisors (who were also her father’s advisors, incidentally), starts to take more interest in the running of her country. She starts to find inconsistencies in what her advisors are telling her, and the word on the streets when she goes undercover. Through a pair of revolutionaries, Saf and Teddy, she learns that her fledgling rule is not doing the people as much good as she hoped, and that trying to get past their country’s trauma by just forgetting it wasn’t the best course of action.

A central point to the story is how the kingdom of Monsea, or Bitterblue’s administration, at any rate, has dealt with the fallout from Leck’s reign. A kingdom woken from a fog discovers how much they had lost, and how much crimes they committed or had been committed against them. On her advisor’s counsel, Bitterblue gives blanket pardons to crimes committed under Leck’s 35-year reign, but the thing is that not all of the crimes were done under his Grace’s influence. Combine that with the odd behavior from her palace staff, she is left with no choice but to investigate it herself. Meanwhile, the Council do visit her regularly, but they have their own tasks in other kingdoms, like one of them discarding their monarchy for a republic and another kingdom taking note of that, and rising against their monarch. While she does get support from Katsa and Po and the others, the truth is that they are all nearly a decade older than her, and she feels like they all treat her like a child. She herself has to balance her wants against pragmatism, and she doesn’t always succeed. She often comes across as bratty, and Saf is brattier than her. Honestly, I don’t get their romance – she has more chemistry and development with Giddon, who, if he wasn’t so much more older than her (she is 18 and he is 26), would have made for a good love interest.

The mystery is a slow building one and the first half does slow down the pace a lot, giving hardly any answers and even raising only vague questions like – what was that about? There’s also a lot of cryptography involved, which makes for a slow progression of events, as she unearths her mother’s story and then her father’s story. Eventually, the mystery evolves into a story of dealing with trauma in a balanced way, to give people time to come to terms with it. It is about not glossing over the dark parts of your history and not taking the easy way out, to bring justice to those affected even by acknowledgement of the pain they suffered. The second half of the book is so much better, as it starts to connect the pieces of the mystery and develop a story about uncovering truths and healing in a proper manner. Finally, the book also gives us answers to what happens after the end of Fire, which was a nice touch.

One thought on “Review: Bitterblue by Kristin Cashore”