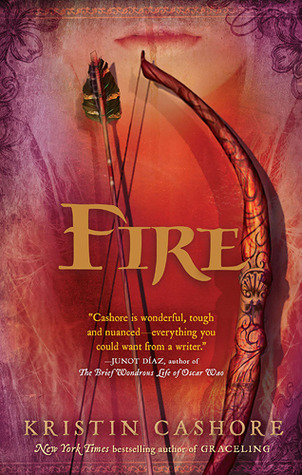 Fire by Kristin Cashore
My rating: 4 of 5 stars

It is not a peaceful time in the Dells. In King City, the young King Nash is clinging to the throne, while rebel lords in the north and south build armies to unseat him. War is coming. And the mountains and forest are filled with spies and thieves. This is where Fire lives, a girl whose beauty is impossibly irresistible and who can control the minds of everyone around her. Exquisitely romantic, this companion to the highly praised Graceling has an entirely new cast of characters, save for one person who plays a pivotal role in both books. You don’t need to have read Graceling to love Fire. But if you haven’t, you’ll be dying to read it next.

Fire’s story takes us out of the Seven Kingdoms to the east of its continent, in the Dells, where it is separated from an impassable mountain range. I loved this expansion of the world which gives us a chance to explore a slightly different fantasy setting in the same world. Additionally, this can be read without Graceling, even though they do share a character, because Fire takes place before Graceling. In the Dells, there are no Gracelings (which makes Leck’s existence an anomaly in this place) – instead they have ‘regular’ humans and animals and ‘monster’ versions of humans and animals. The monsters all share a common trait – they can influence the minds of others, regular or monster, by their beauty as well as their mind magic, with bigger predators being more dangerous than, say, your monster cat. Fire is one such monster, born to a monster father, Cansrel, the previous King, Nax’s adviser, and human mother (who worked in the palace).

Cansrel and Nax had destroyed the kingdom with their hedonism, most of it influenced by the former, who never found peace very satisfying and delighted in chaos. He reveled in his powers over others, and even forced those he couldn’t entirely control. At the start of the book, both are now dead. Nax’s legitimized sons, Nash and Brigan, are now the King and Commander, while his illegitimate children, a pair of twins, are the spymasters. Fire has been away from Dellian politics, in the countryside living with Brocker, who she considers her foster father, and Archer, his son. Due to her father’s sins, she uses her powers as little as possible, though her beauty still passively enchants people. When she is asked to come to the capital and help the spymasters, she is reluctant to use her powers in that way, because she doesn’t know where the line between her and her father would be drawn, and she is afraid of turning into him; she also is questioning the purpose of her existence, which is why she eventually relents.

Fire’s story is partly about rape culture – as a monster, she is appealing to humans and monsters alike, the former wanting to have her and the latter screaming for her blood (which makes her menses a particularly difficult time). Her life is not peaceful in the least, as she can’t even go out without being attacked by one or the other, and often humans blame her enchanting beauty for it, acting like trolls sliding into a woman’s DMs to harass her, even though they all can train themselves to resist it to some extent, and some even going as far as to deliberately not resist her pull. Brigan’s mind is a vault against her, and despite his animosity towards her in the start because of her father and his suspicion that she might try to influence Nash, they soon become allies and friends; a common thing between them is having to step out from the tarnished reputation of their fathers. Nash, meanwhile, is weak against her, and it becomes a chore for her to live in his palace while also avoid his advances. The people, too, are first wary of her because of her father’s reputation, but as she takes risks in the service of the kingdom, she starts to become a hero in their eyes. The politics in the Dell are explosive at this time, with two lords independently working against Nash to dethrone him. Fire and the spy network are trying to figure out their plans, but there are a lot of inconsistencies and even contradictions. Additionally, there is another element interfering, someone who seems to be following Fire, and coming quite close.

Much like Katsa (I can’t help the comparison okay?!), Fire is also a ‘powered’ girl in a world that disenfranchises them, and coming to terms with how to wield said power in their respective worlds. I find it interesting how Katsa was considered a monster because of her actions and not her powers, while Fire is considered one because of her powers but not her actions. There’s also the whole ‘I won’t have children thing’ choices handled differently by both heroines. Am I entirely comfortable with Fire wiping her own kind from the world? No, because it goes against the ‘you are what you do, not what you are born as’ message her story sends; then again, the threat of Cansrel being so recent, I understand her fear. Finally, the romance – I liked the progression of Fire’s and Brigan’s relationship, and how they come together. Archer felt somewhat a wasteful character because he is so abusive (he is constantly jealous, and possessive, and I feel the only reason she tolerates him is because of childhood affection), and later on, it doesn’t hit that hard, if you ask me. Fire’s story intersecting with Leck’s also gives some context for his story later on in Graceling, so it does have meaning to involve him, but I wish it was more extensive.

Overall, a good companion novel for the Graceling!

Previous book in the Graceling Realm

One thought on “Review: Fire by Kristin Cashore”