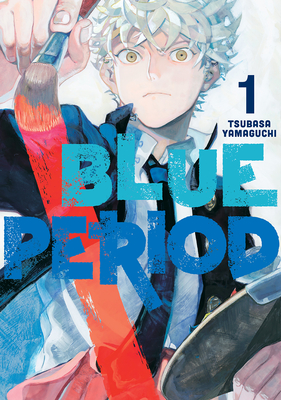 Blue Period, Vol. 1 by Tsubasa Yamaguchi
My rating: 4 of 5 stars

Yatora is the perfect high school student, with good grades and lots of friends. It’s an effortless performance, and, ultimately… a dull one. But he wanders into the art room one day, and a lone painting captures his eye, awakening him to a kind of beauty he never knew. Compelled and consumed, he dives in headfirst–and he’s about to learn how savage and unforgiving art can be…

About a high school student who enters into the world of art, Blue Period is quite relatable in terms of artists struggle, and also is sort of an informative guide to beginners in art. Yatora is a hard-working student who can achieve good results if he puts his mind to it, and also has a delinquent image because of the group he hangs out with, as well as because of his appearance. According to him, getting good grades and social achievements feel like just filling up a quota, and he doesn’t really feel like he has any true interests – until he comes across a painting in the art club’s room that makes him feel so much that he decides to take his art class’ assignment seriously for once. Painting Shibuya at near-dawn in its blue tinted glory gets him praise, and for the first time he feels elated for achieving something. He is, however, also very practical minded and doesn’t think pursuing a career in arts would be all that lucrative, but his art teacher encourages him to do it nevertheless, because he has the drive to make it possible.

Yatora’s goal is to enter the public university for arts in Tokyo, because it is the only elite one that will fit for him and his budget. His journey begins as he joins the art club, and works hard at improving his skills. His senpai, Mori (the one who painted the aforementioned painting) is the one he looks up to, as he sees her as a sort of benchmark. They also have an interesting conversation about talent and hardwork. Another club member, Yuka (gender-non-conforming, uses he/him), also becomes sort of his friend, and helps him out with supplies shopping, and the two of them also go for winter prep courses together, where they meet a genius. Yatora’s journey is not straight-forward, nor is he given shounen-protag-level-skills – he is alternately elated by his progress but also frustrated by his skills, which makes for a relatable story. His home situation is also not what I expected – he hasn’t told his parents yet that he is going to pursue art but they have already found out and are silently supporting him.

The author’s idea to use different artists for the various ‘works’ made by the characters is also a great choice, because it shows the different skills and perspectives of each. I also love the character design, overall, and the way his imagination is presented when he visualizes Shibuya. I am so here for Yatora’s journey, and I also interested in Yuka’s and Mori’s stories!

Received an advance reader copy in exchange for a fair review from Kodansha, via Netgalley