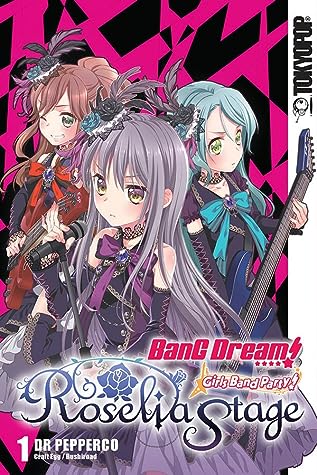 After her father’s dreams of making it big in the music industry crumble beneath the strain of trying to appease both his managers and his fans, singer Yukina Minato is determined to make him proud by forming the “perfect band” of her own! But first, she’ll have to find all the right members. They’ll need unparalleled skill, passion and drive if they’re going to succeed as a J-rock band in such a crowded scene!

Future World Fes is the biggest music event of the year, a world-famous spectacular that showcases only the best of the best. ​Do five high school girls have what it takes to rock their competition and secure a spot on the main stage?!

This is a fairly generic story about girls getting together to form a band, with the personalities of the girls varying from two really serious types, to the others being more playful. All the girls are introduced to us at the start, and they slowly get incorporated one by one into the band the two serious girls are making. They find harmony together, surprisingly, and become quickly comfortable with each other – well, they know each other in some context so it wasn’t that hard. Yukina, one of the girls who starts this, has an ambitious goal to achieve and she is pretty strict on others for that, though I hope she will mellow out and learn to enjoy the music, too. The artwork is cute, and the music playing parts are good, but they don’t render the energy like in, say, Anonymous Noise. Overall, it is enjoyable, and mostly for the relationships between the girls and how they may grow.