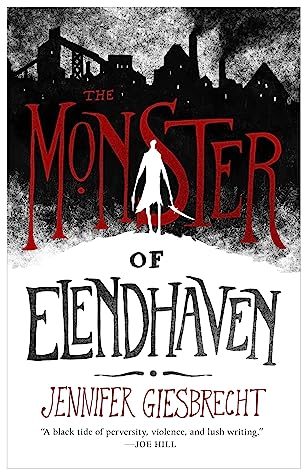 The Monster of Elendhaven by Jennifer Giesbrecht
My rating: 4.5 of 5 stars

The city of Elendhaven sulks on the edge of the ocean. Wracked by plague, abandoned by the South, stripped of industry and left to die. But not everything dies so easily. A thing without a name stalks the city, a thing shaped like a man, with a dark heart and long pale fingers yearning to wrap around throats. A monster who cannot die. His frail master sends him out on errands, twisting him with magic, crafting a plan too cruel to name, while the monster’s heart grows fonder and colder and more cunning.

These monsters of Elendhaven will have their revenge on everyone who wronged the city, even if they have to burn the world to do it.

NOTE: Not a YA book

Oh my god this queer Gothic-ish tale of revenge had me screaming because it has (a) villains as protagonists! and (b) loads of flirting that had me blushing. It would be difficult to go into the plot of this story because it has so many things: an affluent man, Florian, who lost his family and who is a sorcerer, an immortal creature of a man, Johann, who has a taste for violence and is perfect for the sorcerer who doesn’t want to get his own hands dirty, a political subplot involving a mine, sorcerer-hunter, a plague, mythology about the sea, and all this within a novella! While Johann is blatantly flirting with Florian, the latter is putting together the final touches for his revenge (and also flirting back, in his own way), which the former doesn’t know all the details about. Giesbrecht slowly and subtly brings together the elements of the grand revenge plan in a shocking climax, and leaves it off with an open ending. The tone of the story is often brutal and dark, and the main characters have tragic backstories, but it is not fully gloom, what with the twisted romance and the exciting addition of a sorcerer-hunter as an antagonist. Reading this as an audiobook is a delight, because the narration and voices are so on point!

One thought on “Audiobook Review: The Monster of Elendhaven by Jennifer Giesbrecht”