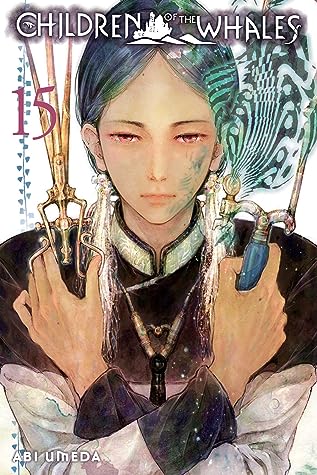 Chakuro, Suou and Shuan ventured the battleship Karcharías, hoping to convince Orca to release Ouni and Lykos. But instead of rescuing their friends, they are now caught up in Orca’s plan to destroy the Mud Whale and all its residents in order to unleash an apocalypse that will overthrow the Nouses and create a parallel world where humans will never again feel pain or sadness. When words prove useless against Orca’s sophistry, will the team from the Mud Whale be forced into violence?!

Suou, while telling the people of Mud Whale that they would proceed to find new land, secretly makes a plane with Shuan and Rochalizo’s crew to go to Karcharias and convince Orca to leave Falaina alone. Chakuro, knowing something is up, joins them and they all make for Karcharias. Suou’s desire to move Orca to mercy is set against Orca’s plans to change the world they live in. Through this volume, we learn more about the Emperor’s plans, as well as what Orca thinks of those plans, as in we get to know what Kataklysmos actually entails (both their plans are stupid btw) and a bit of discussion on what is real and what is manufactured, as per emotions. Which is a big thing to discuss, considering what the Nous feed on. I am more interested in how their plans factor in the countries that use apolithimia.

Is it diverse? Neurodiverse rep

One thought on “ARC Review: Children of the Whales, Vol. 15 by Abi Umeda”