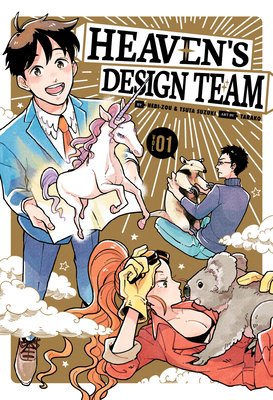 Heaven’s Design Team 1 by Hebi-Zou
My rating: 5 of 5 stars

God created the heavens and the Earth — but, little-known fact, he outsourced the animals to the office of Heaven’s Design Team! This hilarious and educational manga features weird real-life animals and puts even some humdrum critters in a strange new light.

THIS ISN’T YOUR AVERAGE DESIGN AGENCY!

Their assignment? Make the animals that will populate Earth to God’s exacting specs! As ther rejected designs pile up (literally), the team may worry that they’ll never get it right, but that’s often hen inspiration strikes. The result might be a giraffe, a koala, or something new, weird, wonderful — and real! Welcome to the wild thing factory!

This hilarious manga delivered exactly what it promised – a comedy about a design team tasked with creating animals for God, and how they go about creating new animals! – and that is why it gets 5 stars from me. It goes into ‘wonder what God was thinking when creating this animal’ line of thought and creates some hilarious scenarios that led to the creation of several animals, some mundane, some bizarre and some downright scary. The team is in charge of most animals, be it terrestrial, aquatic or aerial (insects are somehow the responsibility of another department of nerd types) and with the wide variety of people, their designs reflect their own personalities. Like how Mr Saturn, who created the horse as his masterpiece, is obsessed with creating horse-like animals thereon. Or how Pluto is a bit on the weird side, creating the bizarro ‘why are you like this’ kind of animals with cursed designs, like poisonous frogs or koalas, or how Neptune is somehow really good at creating good functioning animals and seems like a guy you can chill with.

The story starts with the introduction of a new team member – Shimoda, who is an angel liaison, and whose main job is to basically deliver divine approval (I assume some telepathy is involved). I say the ‘story starts’ but it has more like a sitcom vibe (and I’m so excited for the anime) with each chapter dealing with the creation or design of some animal or another (and which means there is plenty of material) and the challenges of designing it to God’s vague-as-hell design parameters and also ensuring that said animal can live and not go extinct immediately. Tests are done via the engineer who has a Test island which she uses to create the different environments, but she also gives her opinion on the viability of an animal design – like when Saturn wants the pegasus to go through but she describes how it just isn’t feasible for the design to work! Side note: it is excellently researched, btw, with the ‘stories’ going into physiological characteristics and evolutionary advantages/disadvantages for a particular design; there’s also a section at the end of each chapter talking about the real life animals, and which is quite informative for a bio nerd like me (I did NOT know the giant squid was a thing)

While the personal relationships between the characters is not explored, there is a bit of rivalry vibe going around, which makes for some hilarious animal combinations. When Mercury designs a snake (common egg eater) that targets Venus’ weaver bird, the latter tries to alter the design of the bird’s nests and finally, frustrated with the dominance of the snake over the bird, designs the secretary bird to eat snakes! Neptune’s sperm whale design made in reaction to Pluto’s squid design results in a bizarre combination of superpower-like features added to said animals. Them interpreting God’s design requests in interesting ways is also something that is indicative of their personality, like how Pluto designs the koala in response to ‘an animal that is adorably uncute’ (for her the adorable was the fact that it would eat poisonous plants and give semidigested food to its young, while the uncute part was its appearance – she is quirky, yes) or how they design the clownfish to change genders in response to ‘creature that lives in groups but has only one mating pair’. The unicorn chapter was especially hilarious (I also learned about why deer antlers are LIKE THAT), and I loved how it was informative and also comedic.

I could go on and on about the brilliance of using specific animals’ bizarre features to write stories about their creation, but you have to read it to get it. The artwork also is quite good – the design of both characters and the animals (all anatomically correct) is well-done and the comedic timing in the storyboard is excellent! This is a new favorite series for me!