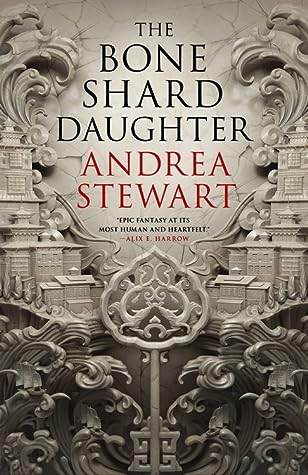 The Bone Shard Daughter by Andrea Stewart
My rating: 5 of 5 stars

The emperor’s reign has lasted for decades, his mastery of bone shard magic powering the animal-like constructs that maintain law and order. But now his rule is failing, and revolution is sweeping across the Empire’s many islands.

Lin is the emperor’s daughter and spends her days trapped in a palace of locked doors and dark secrets. When her father refuses to recognise her as heir to the throne, she vows to prove her worth by mastering the forbidden art of bone shard magic.

Yet such power carries a great cost, and when the revolution reaches the gates of the palace, Lin must decide how far she is willing to go to claim her birthright – and save her people.

The Bone Shard Daughter was a delight to read in every aspect – the world-building, the characters, the themes, the plot, everything. Told by five narrators, the story takes place in a world where the empire is a series of floating islands migrating in patterns in an Endless Sea. The current emperor, Shiyen, is from a dynasty who had ended a previous dynasty of superpowered/god-like people, by using bone shard magic (and whose return they fear), and his daughter Lin is his heir who yearns for his approval and his tutelage of the magic; the bone shards and the life force for said magic comes from the populace. Obviously, people are not happy with this arrangement, and a revolt from a group called the Shardless Few seeks to depose the emperor; Ramani and her girlfriend Phalue get involved in the cause; Phalue being daughter and heir of one of the governors, is reluctant at first. Jovis is a smuggler who is running from a pirate operation, and who has been searching for his missing wife for seven years, and inadvertently gains notoriety and is hailed as a hero for saving kids from Tithing. Sand is living on a distant isle, without any memory and only driven by routine until she realizes something was off.

The story primarily focuses on Lin, Jovis and Ramani-Phalue come in to fill up some perspectives. Lin doesn’t have her memories from more than five years ago, and she is constantly trying to live up to her father’s expectations, which are primarily that she remember. She is competing with her father’s foster son Bayan, who is being taught the bone shard magic that she isn’t. Currently, the magic fuels constructs – creatures that have the bone shards with instructions embedded into them (think organic machines running on AI)- and four top-tier constructs run the empire’s daily business under her father’s instructions. Frustrated with her progress, she goes about sneaking into the forbidden libraries using stolen keys and learning herself, as she feels Bayan being too similar to her father would make for a terrible emperor. Along the way, she uncovers much more to the constructs and her father’s plans. I particularly liked the magical element – it is sorta like necromancy, but more intricate in its rules. Lin cleverly uses the knowledge she learns from books, and tries to turn her father’s constructs to obey her instead. Her emotional attachment to a blacksmith’s family as well as concern for the citizens of her empire fuel her ambition primarily, and are her anchor when it comes to making decisions.

Jovis’ story brings out the world set-up, i.e., the floating islands which I am still so entranced by! I wanted to know more about how the previous rulers influenced the lands, and the possibility of creatures in that Endless Sea! Anyway, back to Jovis – so he smuggles out a kid marked for Tithing when an island sinks into the sea (I guess that’s why this series is the Drowning Empire and I wonder if it is going to coincide with the rise of the previous rulers) – and soon, he is being inundated by parents who want him to save their kids from ‘bone donation’. He also gains an animal companion, Mephi, who is the cutest thing ever, and who he first thought to be a kitten but turns out to be a magical talking creature, who also gives him superpowers. Now, Jovis wants to keep searching for his wife Emahla, but he also can’t ignore the plea for help, and also Mephi encourages him to do good. I particularly loved the bond between them, starting from an unwilling pet to something he would care for immensely.

Phalue is the governor’s heir but her long-time girlfriend (and who she hopes to make her wife) Ramani wishes that she were more, ahem, woke. See, Phalue thinks she will wait for the governorship to pass onto her to make changes, but she is still not clear on how much needs to be changed about the world they live in. Ramani sort of forces her hand, when she gets involved with the Shardless, to see the plight of the people, and face her own privilege. Their relationship is strained a bit by Phalue’s obliviousness and Ramani’s frustration with it, but it also explores class structure, and the worldview therein, and how to reconcile with that. I wish that there was more about them, especially Phalue who wakes up and realizes how much of her father’s injustices she let slide – they sort of go into the background when Jovis gets into Shardless business. By the way, did I mention this is a world without homophobia or misogyny? Like, Phalue’s desire to marry Ramani had no objection, and both Phalue and Lin being female heirs to their respective titles was never in doubt just because of their gender.

While the story at its core is about people being oppressed by a powerful ruler, and our protagonists working to change the world they live in, the bone shard magic element adds a powerful aspect to the world building. The current dynasty being built on a revolution itself, it speaks to how power and ambition are a heady mix; there are some cynical elements presented by Jovis, who doesn’t truly believe that the change wrought by the Shardless will be all that good either. Additionally, the reveals about the extent of the Emperor’s magical abilities were quite awesome – the constructs are all mostly sentient enough, but the four that run his empire were also independently thinking and having Lin matched against such a powerful adversary was quite a challenge for her story. Additionally, I’m interested in how Lin will fare from hereon out – with the bone shard magic that was supposedly for protection but was eventually used to make things easier for governance, and the two new challenges for her that arise at the end of the story. Jovis being a character with complex desires also makes me eager to see what he does next.

Received an advance reader copy in exchange for a fair review from Orbit, via Netgalley.