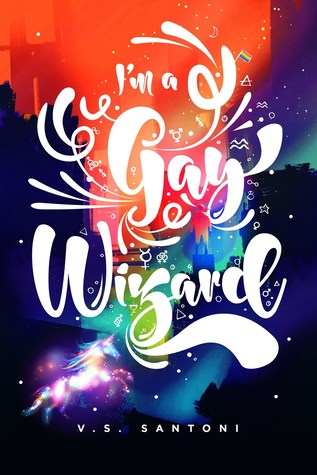 You try magic once and it sticks to you like glitter glue . . .

When Johnny and his best friend, Alison, pass their summer holidays dabbling in magic, they never expect it to have consequences. Sure, it’d be great if they could banish bullies or change their lives for the better, and what harm could come from lighting a few candles and chanting a few spells? When they cause an earthquake that shakes Chicago to its core, they draw the attention of the Marduk Institute, an age-old organization dedicated to fostering the talents of young wizards.

Once there, Johnny and Alison are told they can never return to their previous lives, and must quickly adapt to a new world shimmering with monsters, fraternities, and cute boys like Hunter and Blake. But when they’re pulled into an epic, supernatural fight that could cost them both their lives, Johnny and Alison find strength they never knew they had as they battle for love, acceptance, and their own happy ending—all with the help of a little magic.

Firstly, I must say, it was much different from what I was expecting when I went into it: the word ‘wizard’ usually invokes a magic school like Hogwarts, but in this book, the Institution is basically a prison. There’s no cheery train, they are ‘extracted’ *ahem* kidnapped, which is often violent and involves knocking them out and them waking up in a strange place. Juan aka Johnny, and his best friend, Alison, sometimes practice witchcraft but nothing has worked; however, when they perform a spell the day after the two of them are violently attacked by their jock classmates, they unwittingly get on the radar of the Institute, whose goal is to keep magical folks separated from non-magical folks and they have a building where they keep the ones they consider ‘bad’ contained. This is basically my circuitous way of saying that instead of a magic-themed urban fantasy, the tone of the novel is more like a dystopia.

The kids who are all brought to the Institute are told that their old lives have been erased from the memory of people around them, but obviously anyone is going to try to escape. And Johnny and Alison aim to do just that – they are just waiting for more info on how to get out safely, and the only option looks like the Defectors, a group of wizards who are against the Institute, which is also like a taboo topic to discuss. So initially, they like go along with their school schedule and see how things work. Johnny finds a new friend, Hunter, who he is attracted to, and Alison finds the dreamspace for comfort, thanks to Blake, their RA, who is interested in her, but she is keeping at a distance because she fears transmisia. They are all part of the non-Lineage students, so they don’t get the privileges the Legacies do (which are basically like frats, but magical). Johnny is having nightmares of a sandman creature lurking and waiting to attack him, and he feels it is connected to the spell they had cast, but considering their recent traumatic experiences, he and Alison don’t take it seriously at first.

Now, the thing about this book is that the world-building mythos, while interesting in its outlines, is not extensive enough to fill up the world of this book. The magical school is not really magical – heck, even the spells that Johnny uses later on in the book are what he learned from Hunter or Blake, not from something in class. The whole reason for having separate classes for non-Lineage students seems flimsy, if the only reason they keep them around is for support activities. The magic is not even explained properly – it either works by intense visualization or by actually altering the workings of their universe, and they pick it up quite quickly, or can just follow instructions from a book, so what is the point of classroom learning in the first place? And don’t even get me started on those mass memory erasure spells they do when they extract students, which doesn’t fit in with the magic explanation. To look at it from a certain angle, it feels like a dystopian plotline is being enmeshed into a magical set-up, but the execution fails to do it properly.
While I like Johnny as a protagonist to read through, at times, he can be unnecessarily verbose in his descriptions, like who talks like that internally? His romance with Hunter was cute, though it got intense quite quickly, for the ending where those stakes were needed but that development wasn’t quite in place. I, however, liked the found family dynamic between them all – Johnny, Hunter, Alison and Blake, and how they come through for each other. But there was also a lot of distance we see between Johnny and Alison, when we barely get to see them as being best friends, so it lowers the stakes too.

Overall, well, I found it difficult to rate the book. I loved the mythology of the realms, and the origin of the world, etc, but the execution of magic in practice didn’t impress me. I loved the characters and their overall group dynamic, but individually I found some developments lacking. The genre mash-up is a bit disorganized, too, and while I like the themes of them fighting against the machine, I feel pushing the magical side would have made this more engaging.

Received an advance reader copy in exchange for a fair review from Wattpad Books, via Edelweiss and Netgalley.