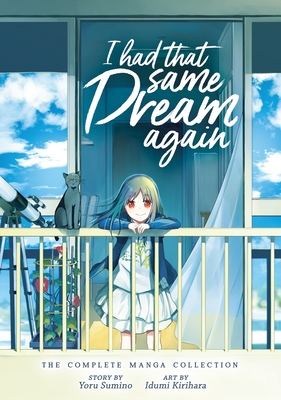 I Had That Same Dream Again: The Complete Manga Collection by Yoru Sumino
My rating: 5 of 5 stars

A layered coming-of-age story from the creative team behind I Want to Eat Your Pancreas–and don’t miss the original novel, also available from Seven Seas.

An unhappy girl who engages in self-harm, a high schooler ostracized by her classmates, and an old woman looking to live out her twilight years in peace–what could three such different people have in common? That’s what grade schooler Nanoka Koyanagi is trying to find out. Assigned by her teacher to define what “happiness” means to her, Nanoka tries to find her place in the world by exploring her relationships with these three strangers, and through them, comes to know herself.

The manga adaptation of the light novel of the same name, it is faithful adaptation to the original. I pretty much read this one after another, so practically what I thought of the novel pretty much applies to this manga. Additionally, I gotta talk about how much I loved the artwork and the depiction of the events of the novel – the character design, Kiryuu’s artworks and the emotional scenes were all done so well! It balances the slightly humorous tones of its narrator with the dark subject matter. And now, the review for the story:

After reading At Night, I Become a Monster by the same author, I was quite excited for this book – and it definitely didn’t disappoint. The story is told from the point of view of an elementary school kid, Nanoka, who is a precocious little thing; part of her story is about her trying to help a classmate who is getting bullied, but the overall theme of the story is about her growing to learn what the meaning of happiness is.

Nanoka doesn’t really have friends among her classmates, but she is not exactly a loner – she speaks to others on a friendly basis, shares book recommendations with one, and is sorta chatty with her seat neighbor, Kiryuu. Her actual friends are a cat, a high school girl she meets on a deserted building’s rooftop, Minami, a young woman whose house she frequents, who she calls ‘Skank-san’ after she mistakes the slur on her door for her name, and an old woman whose house she visits. Being the only kid of working parents, she has the freedom to walk around the neighborhood, and she daily goes out with the cat.

The story starts when Nanoka’s class gets an assignment in language class to discuss ‘the meaning of happiness’ and while any kid would answer something simple like ‘eating sweets’ or ‘playing with friends’, Nanoka wants to seriously consider and she asks her friends for help. As a kid she doesn’t fully realize it, but two of her friends are dealing with some stuff and aren’t happy with their lives, and their interactions with her prompt them to reevaluate the meaning of happiness for them. Nanoka herself resents her parents a bit for not putting her above their hectic life, and talking with Minami helps her fix her relationship with her parents.

The other meaningful relationship in the story is Nanoka’s and Kiryuu’s. When Kiryuu’s dad is caught shoplifting, it affects Kiryuu’s life at school – he becomes an outcast, a target of bullying (he was already bullied for being quiet and interested in drawing) and he stops coming to school. Nanoka fights on his behalf, but she is also frustrated that he won’t fight back. She tries to get him to come back, but her initial approach makes matters worse. When she talks to the young woman and the old lady, she figures out a better way to help him out, and learns what it means to truly be an ally to someone, and what she herself didn’t realize about her own wants. About who those three women are to her, that is a big spoiler, but it was a nice touch – I still feel Minami’s name wasn’t explained. The message that happiness is something you choose by your actions, and something you work towards than have was laid out beautifully in Nanoka’s story, as well as the importance of meaningful connections with those around you. And obviously, like her other novel, this one made me cry a bit, too.