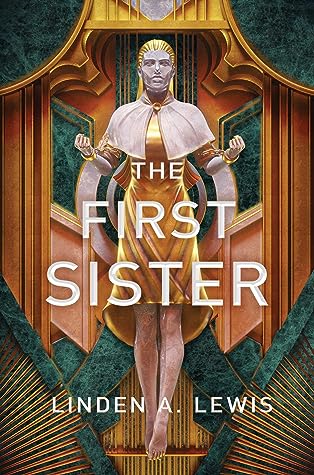 Combining the social commentary of The Handmaid’s Tale with the white-knuckled thrills of Red Rising, this epic space opera follows a comfort woman as she claims her agency, a soldier questioning his allegiances, and a non-binary hero out to save the solar system.

First Sister has no name and no voice. As a priestess of the Sisterhood, she travels the stars alongside the soldiers of Earth and Mars—the same ones who own the rights to her body and soul. When her former captain abandons her, First Sister’s hopes for freedom are dashed when she is forced to stay on her ship with no friends, no power, and a new captain—Saito Ren—whom she knows nothing about. She is commanded to spy on Captain Ren by the Sisterhood, but soon discovers that working for the war effort is so much harder to do when you’re falling in love.

Lito val Lucius climbed his way out of the slums to become an elite soldier of Venus, but was defeated in combat by none other than Saito Ren, resulting in the disappearance of his partner, Hiro. When Lito learns that Hiro is both alive and now a traitor to the cause, he now has a shot at redemption: track down and kill his former partner. But when he discovers recordings that Hiro secretly made, Lito’s own allegiances are put to the test. Ultimately, he must decide between following orders and following his heart.

A stunning and sweeping debut novel that explores the power of technology, colonization, race, and gender, The First Sister is perfect for fans of James S.A. Corey, Chuck Wendig, and Margaret Atwood.

I received this book from Netgalley and Skybound Books in exchange for an honest review.

It’s no lie that my favorite book is Dune. I’m a sucker for a space operas, on other worlds affairs, families in political dilemmas, soldiers in a constant war for their planet’s future, and a rebellion brewing in the horizon to help the oppressed cause nobody else seems to have the courage to change the system. I just love those type of stories, so I read multiple series like that set in the big cosmos above our skies. When I saw the cover for The First Sister something inside my heart burst up. Alien feelings awakened when my eyes gazed upon it, I did not care what the premise was about, or who the author was. I KNEW that no matter what, I’d own this. That this book would be mine one way or the other. I only have such gut feelings for a few memorable occasions and this book met all of my exceptions as a reader.

“May the heart of the universe, keep you, and may you never forget we are all born from the same stuff as stars.”

Humanity as we once knew it had left earth, after they tarnished it for so many years. Now scattered at the far edges of the cosmos, the people reformed into new society on the surfaces of Mars, Mercury and Venus and even asteroid belts, each faction fighting for resources, religious holy war or injustice. Our story is split into three individuals, First Sister, a young woman from the Gaen society, working on the Warship, Juno, for the religious sect of the sisterhood who follows the teaching of the canon. She almost had her happily ever after with her sweetheart but nothing is so simple as we hope it to be. Lito Val Lucius, an operative for the Icarii special is sent for a covert mission to recover crucial information to what may be a the betrayal of their partner in favor of their enemies and Hiro, the alleged traitor who is an enigma. Did they sold off information to the Gaens? Did they switch sides? Lito tries to seek the truth all the while listening to tapes Hiro left for him.

“Be what they want. Be what they need. Be everything for them, so that they will leave your chambers without sadness without guilt, without lust. No distraction while they’re on duty.”

There’s such viciousness in us humans to be able to conduct such a unspeakable idea as to take young innocent girls and essentially, take away their voices, their uniqueness and turn them to a tool to encourage the soldiers of Gaens to feel better, to be unburden by their earthly worries by using them in ways I shall not even try to imagine. Thankfully we are saved by such imagery due to Linden’s small kindness to us but it’s there, a reminder to what First sister and so many other sisters and probably their counter part the cousins have to endure each day in the name of their suppose “GODDESS” and what the Mother is deeming rightful. I was hooked by First Sister POV, how she coordinates her new status and is swimming in unknown water not sure who’s her ally or foe anymore. Her journey, her romance, she became so important to me that some moments I forgot she was just a fictional character and not real.

And then there were Lito and Hiro each in their own way, lovable, their pasts, their friendship, what will become of them in the future was frightening to me. Lito hunting down his best friend, his partner, probably his only friend and for what? A society that didn’t cared for him and his poor sister? That by hard work he gained his new title after excruciating trials and yet he’s still not good enough in the eyes of the Icarii? And Hiro… God I can’t even fathom what they had to go through in their household, with their monster of a father, their identity and caring so much for Lito that they’d die for him and Luce. How everything in this story begins to split and comes by the end into a satisfying conclusion was great in my opinion but some of the twists in my opinion felt a bit too pushy for me, but hey, it’s a trilogy and a debut you gotta give the author some slack.

“Mother, I pray that this is not how I die- voiceless, sightless, deaf. Truly, this is hell.”

You know what I love about space? There’s myriad of possibilities that can happen if we ever decided to take the leap and blast off into space. Linden take on the future is by far the most refreshing take I’ve seen in fiction. The primer authenticity and the speaking languages are not just English or western, no. It’s overflowing with diversity that we so much need in this genre of science fiction. English, Spanish, Chinese, Japanese, these are but a small examples of the majority of representations in both the Icarri and the Gaens and don’t get me started on the incredible acceptance of LGBTQ+. Nobody needs to be afraid of their sexual identity, attraction, gender, it’s something so trivial in compare to the multitude of issues at hand. And the technology of the implants, the mecha ironsuits, the shape shifting mercury blades, it’s like the wet dream I desired for so long!!!

I hope this review, as much as it is obvious, convinced you to try out The First Sister. Linden created a promising new trilogy to enjoy in the coming years. It’s hella diverse with plethora of characters, space is so big and the plants are so vast to explore and we don’t have to worry about what bothers us as of now. Order the book, spread the word, and may the heart of the universe protect you in these rough times. Stay safe ❤