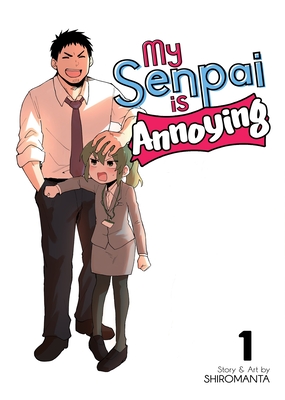 My Senpai is Annoying Vol. 1 by Shiro Manta
My rating: 3 of 5 stars

Igarashi Futuba’s new job would be great if her senpai, Takeda Harumi, wasn’t so incredibly annoying! Futuba hates his laugh, she hates how big he is, and she really hates that he treats her like a little kid. Just because Futuba is short and looks young doesn’t make her a kid, and just because she spends so much time with Takeda doesn’t mean she sees him as anything but an annoying senpai…or does she?!

A rom-com between a tsundere-ish office worker and her bear-like senior, My Senpai is Annoying hits a lot of romance tropes and is a good quick read. Igarashi has been working for a few years under Takeda, and she is sort of annoyed of being treated like a kid by him; it doesn’t help that she is short and sort of has a slim frame, which means on first glance people assume she is a middle school (not even high school, poor thing). They hang out together regularly, etc., and he always takes care of her, so she likes him but also can’t admit it to herself. Their co-workers are onto her feelings and tease her about it, but the main guy himself is an unknown. Well, considering this is a romance manga, maybe not that unknown. Anyway, it feels formulaic for the most part, and the artwork is good when it comes to the linework, but I don’t get the coloring in this manga. I know it started as a web comic, but there is no consistent palette or anything – some pages are full-colored in orange overtones, some have vibrant green tones, some are barebones with accent coloring and I think a couple were just linework in a regular manga style; it is just all over the place. I do like the characters, though, especially her co-workers, so I might still pick up sequels of this series.

One thought on “ARC Review: My Senpai is Annoying Vol. 1 by Shiro Manta”