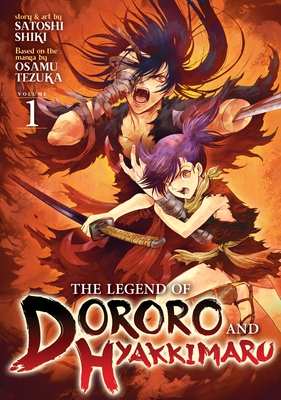 The Legend of Dororo and Hyakkimaru Vol. 1 by Osamu Tezuka
My rating: 3 of 5 stars

A young swordsman travels alone through war-torn Japan, hunting demons wherever they might hide. His name: Hyakkimaru. Soon he crosses paths with Dororo, an orphan who steals to survive. Dororo can’t help but wonder: Who is this demon hunter with skin as cold as ice, and blades hidden inside his own arms…?

I liked the 2019 anime series Dororo, so of course, I was interested in reading the manga. I must say, though, that my reading of the manga is very much influenced by all the information I had from the anime; a newbie to the series would honestly be confused as to what is going on because this manga doesn’t really do much in the way of establishing anything. It jumps straight into the action, with Hyakkimaru arriving to inadvertently save Dororo, and the latter follows him thereafter, and the story moves into the Bandai arc. Why and what is Hyakkimaru is not even touched upon, with the old man telling Dororo to ask him directly what his story was. The artwork is decent enough, though the style looks a bit dated (more like 90s style that modern shonen); I don’t know how it was in the original manga series, but the character of Hyakkimaru in this manga is much more gruff and aggressive compared to the anime, which changes the dynamic between them substantially. Overall, I think, if you want to read this manga, it would be better to watch at least the first few episodes of the anime beforehand; of course, this lowers the story-telling quality of the book itself if you need to refer to another media just to understand it. I’m hoping the next volume provides the necessary exposition.

One thought on “ARC Review: The Legend of Dororo and Hyakkimaru Vol. 1 by Osamu Tezuka & Satoshi Shiki”