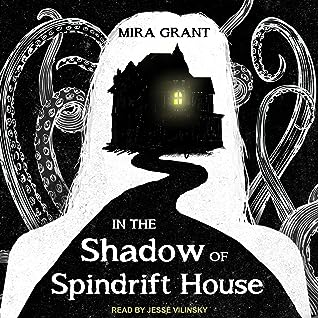 In the Shadow of Spindrift House by Mira Grant
My rating: 4 of 5 stars

Nature abhors a straight line. The natural world is a place of curves and softened edges, of gentle mists and welcoming spirals. Nature remembers deviation; nature does not forgive.

For Harlowe Upton-Jones, life has never been a straight line. Shipped off to live with her paternal grandparents after a mysterious cult killed her mother and father, she has grown up chasing the question behind the curve, becoming part of a tight-knit teen detective agency. But “teen” is a limited time offer, and when her friends start looking for adult professions, it’s up to Harlowe to find them one last case so that they can go out in a blaze of glory.

The stories and legends surrounding the decrepit property are countless and contradictory, but one thing is clear: there are people willing to pay a great deal to determine the legal ownership of the house. When Harlowe and her friends agree to investigate the mystery behind the manor, they do so on the assumption that they’ll be going down in history as the ones who determined who built Spindrift House—and why. The house has secrets. They have the skills. They have a plan. They have everything they need to solve the mystery.

Everything they need except for time. Because Spindrift House keeps its secrets for a reason, and it has no intention of letting them go.

Here’s where the story bends.

A group of teen detectives (who are now adults) go for one last job – staying at the infamously haunted Spindrift House and uncovering which of three families are the owners of the house. For Harlowe, the case is personal as well, since her biological family is one of the families who are contenders for the ownership of the house. The group consists of Harlowe and her adoptive brother Kevin, and their best friends, the twins, Addison and Andy; Addison has big dreams and her brother Andy will follow her, so their group is about to separate and Harlowe suggests this case which has a large reward, hoping that would keep them together a bit longer. The first part of the book introduces us to the group, and their dynamic and their achievements so far, and how they work together and how close they are, as well as the existing tensions between them; it is also made clear that Harlowe likes Addison, but she has never confessed this to her. Once they get at the house, though, the tone of the story changes – while the focus is on the group, the introduction of the house’s haunted elements give a double-punch. Speaking of the house’s haunted elements, it is very much sea-based in origin, and with the house, too, at a coastal town, it nails that horror aspect of the sea quite well. The story also has these parts from another character’s view, who spins the tale of the house into the story, and how Harlowe’s family is tied into it. The ending takes a toll on the characters, and delivers on a grim finish, and kinda makes me wish it wasn’t just a novella, if only to dig and explore more of the horror aspect of the story. The narrator, Jesse Vilinsky, does a great job with narrating the characters, and introducing the voice variations with the characters’ states was done quite well.

One thought on “Audiobook Review: In the Shadow of Spindrift House by Mira Grant & (narrated by) Jesse Vilinsky”