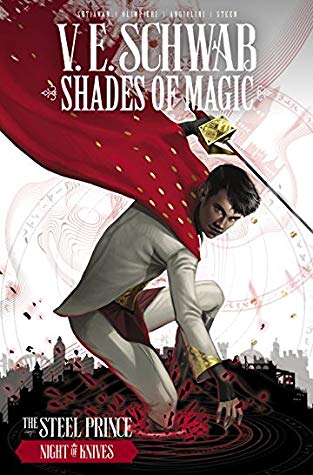 The young and arrogant prince Maxim Maresh, having faced the terror of the Pirate Queen, now aims to capture the respect of the combative port town of Verose – by taking the impossible challenges of the Night of Knives… and surviving, where none has survived before!

These are the hidden, secret adventures of Maxim, from long before he became the king of Red London and adoptive father to Kell, the lead of A Darker Shade of Magic!

After Maxim decides to ignore his father’s offer to come back to London, and instead stay in Verose to whip the city back in shape, he is having a tough time earning the respect of his soldiers and the city, despite defeating the Pirate Queen. One of his soldiers tells him that the Night of Knives is a trial to prove yourself, and obviously Maxim jumps on that, despite Isra’s (who has been through the Night of Knives before) warnings that it is foolhardy to do so. But Maxim’s gonna Maxim, I guess, because he is going to do it even when people are like “Maxim, no”. The Night of Knives is a series of four trials designed by an Antari magician a couple of decades ago, and it tests the mettle of a magician, with magic, without magic, and to face their own demons. No one has made it out alive from the fourth trial, though, and even Isra gave in after two trials. Maxim’s trial, however, has, uh, some complications, a result of something he had done in the past coming to bite him back. As in the previous volume, I like the magical fights and stuff, but the artwork itself is too dark to be aesthetically pleasing or even visually clear. It also felt very short in that, it was mainly about the trials.