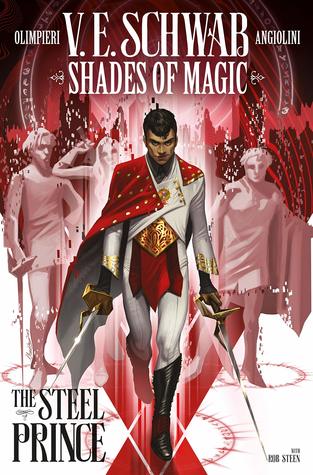 Delve into the thrilling, epic tale of the young and arrogant prince Maxim Maresh, long before he became the king of Red London and adoptive father to Kell, the lead of A Darker Shade of Magic!

The youthful Maresh is sent to a violent and unmanageable port city on the Blood Coast of Verose, on strict orders from his father, King Nokil Maresh, to cut his military teeth in this lawless landscape.

There, he encounters an unruly band of soldiers, a lawless landscape, and the intoxicatingly deadly presence of the newly returned pirate queen, Arisa…

I had been waiting for a chance to read this graphic novel series, and when the galleys were put up on Edelweiss, you betcha I screamed. The series is a prequel to Shades of Magic, but you don’t really need much context from that obviously; though I guess Shades of Magic gives you a proper explanation for the magic system, and how it works for the magicians in this. Anyhow, so the story is about Maxim when he is a prince, and how he was a bit idealistic, a bit arrogant, a lot charming, and eager to throw himself in a situation. His interest in reaching out to the other worlds worries his father, the King, who exiles him to a far-off port town to learn something about ruling his own country first. Said town, though, has been quite neglected by the central power, and is instead is oppressed by the Pirate Queen, who is a bone magician (a banned form of magic), and thus quite feared.

When Maxim gets there, he meets the barebones version of the city guard, and most importantly, he meets Isra, who has familial ties to the Pirate Queen and is itching to get back at her. The majority of the plot is about Maxim and Isra going up to fight against the Pirate Queen, first by participating in a contest to win a chance to fight against her (which is set up as a final test to join her crew) – and there are some amazing magic fights to watch, especially with Maxim’s talent for manipulating metal, particularly steel. It is focused mainly on Isra’s story, but Maxim’s character arc is also about him finally deciding he is fine where he is, and wanting to fix the places in his kingdom. The artwork was a bit of a miss for me, because with the dark color scheme (is there no sun, FFS) it is frustrating for some scenes, and details on the otherwise interesting outfits get lost; the magic battles were a hit for me though, because they were awesome! For this series, though, I am more invested in the story than the artwork.