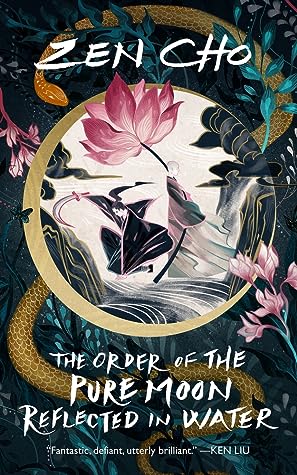 The Order of the Pure Moon Reflected in Water by Zen Cho
My rating: 4 of 5 stars

Zen Cho returns with a found family wuxia fantasy that combines the vibrancy of old school martial arts movies with characters drawn from the margins of history.

A bandit walks into a coffeehouse, and it all goes downhill from there. Guet Imm, a young votary of the Order of the Pure Moon, joins up with an eclectic group of thieves (whether they like it or not) in order to protect a sacred object, and finds herself in a far more complicated situation than she could have ever imagined.

Note: Not a YA novella

This book is quite entertaining and hilarious with a quirky cast of characters, which makes it a shame that it is only a novella. So, the basic story is that a group of bandits are traveling to sell something they have, but their plans are sent into disarray by the addition of a new member, a plucky nun who has basically forced her way into joining them. Guet Imm, the nun, has been in seclusion for nearly a decade, so she doesn’t initially know what caused her tokong to burn down, and what is the actual state of religious orders these days, and how they are being targeted by the governance for helping out bandits and revolutionaries like they do for all. Said bandits were ex-revolutionaries who have to resort to hiding in jungles and making black market trades to survive, and they are currently carrying something quite invaluable.

The highlight of the book are the characters – they are entertaining but also complex. Fung Cheung is the leader who can charm anyone because of his immense beauty but is also shrewd and cavalier at times. Tet Sang is the second in command who is honestly exhausted from managing Fung Cheung and the others. Ah Hin is the puppy, Ah Boon is kinda boorish, and the others are all quite skeptical of having a woman join the group, but Guet Imm wins them all (Tet Sang is still wary, though, but also considerate to her), until adversity again drives them to blame her for their troubles. Their banter is quick and witty, and there’s a lot of camaraderie to go around, and the best relationship development is between Tet Sang and Guet Imm, and I loved that little romance suddenly hitting you with feels. Oh, and did I mention most of them are queer as hell?

The writing is a bit different from what I have read before of the author, but it has its charms. Most of the dialogue leans towards banter, and yet there are also conversations explained out in the third person. The pacing is kinda choppy, though, and it starts with a bang, but then lags in the middle. However, the characters do keep things interesting, so overall it turns out to be engaging and entertaining.

Is it diverse? queer cast of characters

One thought on “ARC Review: The Order of the Pure Moon Reflected in Water by Zen Cho”