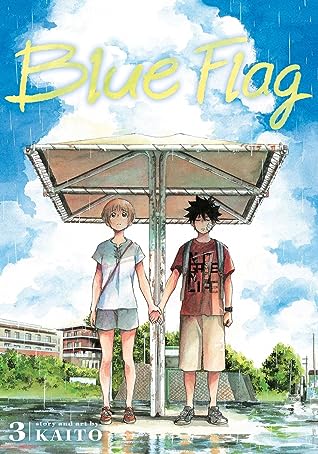 After the accident in which Toma broke his leg, Taichi feels quite guilty of being responsible for him getting hurt. Additionally, it also hurt the chances of Toma playing for his school’s team at the qualifiers and well, he feels doubly troubled for letting down his school’s team. And then again, seeing that Toma’s parents had died in car accident due to a kid darting on the road, Taichi just feels awful all around for nearly causing a death, and also about bringing up bad memories. This is also a Taichi-centric book as he reminisces on his childhood friendship with Toma and how he was envious of him, and his own low self-esteem and feelings of inadequacy are swirling within him. Toma tries to reassure him that saving Taichi’s life was more important to him than anything, but Taichi is determined to feel awful about the whole ordeal so Toma asks Futaba to console him; she, too, feels Taichi needs her support more at this time, and goes to console him but a fight between the two makes her re-analyze her feelings for both the boys. Once again, the different aspects of ‘liking’ someone are called into the foreground. There is also some additional drama with that popular girl who likes Toma, and who doesn’t like Taichi’s or Futaba’s presence around him, but what she’ll do about it is yet to be seen.

Is it diverse? gay and lesbian major characters