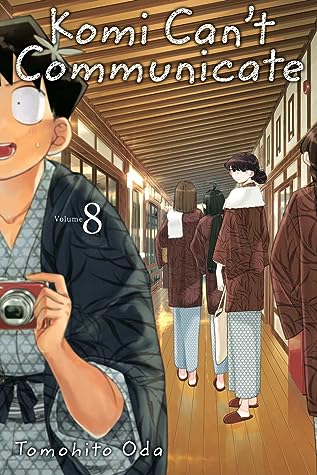 It’s time for the school trip to Kyoto. Komi has never been on a school trip before, but she’s not worried. After all, she’ll have Tadano and her friends at her side! But then she’s assigned to be buddies with two girls she doesn’t even know who don’t seem very nice. Is Kyoto ruined, or will Komi be able to make new friends all on her own?!

After some awkwardness from the time Tadano was sick, Komi is fretting a bit about what Najimi is thinking, having caught the former holding Tadano’s hand, which was honestly so cute. Nevermind that the whole class probably knows about their mutual crushes on each other! The main event in this book is their class trip to Kyoto – where they are to be separated into groups; Komi was initially nervous about it, and she gets grouped with two girls, Kato and Sasaki (who I suppose were not yet in her ‘list’). Both the girls, by the way, have schemed to make the trip a great one for Komi, and Kato is even prepared with a whole itinerary and stuff for their second day, when they get to go off into the city on their own. There were a lot of shenanigans, despite the initial awkwardness, with them having fun. Yamai is creepy as usual, which is a bit of a disappointment when we have come so far in the series.

One thing I loved is how much her classmates are aware of Komi’s and Tadano’s relationship. There’s this self-absorbed guy, Naruse, who wants to get close to Komi (because she is pretty, like him, according to him) but he keeps getting blocked every which way from even approaching her. Meanwhile, Komi’s feeling a bit more comfortable conversing with her classmates, even if they sometimes misunderstand and think she is closed off when she is just shy to talk to them. By the way, Komi and Tadano are so cute that even the tour guide was like ‘get married already’! Between how the two are, though, I wonder who will take the first step.

Is it diverse? neurodiverse character (communication disorder), trans side character