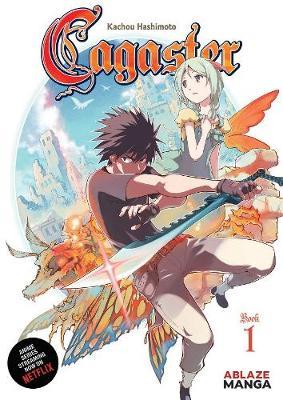 Cagaster Vol 1 by Kachou Hashimoto
My rating: 3 of 5 stars

It’s the year 2125, and a strange plague called “Cagaster” appears. One-in-a-thousand people is infected by this disease, which turns humans into monstrous cannibalistic insects. Two-thirds of humanity is decimated… 30 years later, young expert bug exterminator and mercenary adventurer Kidou and newfound friend Ilie struggle to survive in this brutal new world, while delving into the mysteries of the plague and its causes. Kidou is tasked with finding Ilie’s mother, after being entrusted with her by her dying father. Meanwhile, the battle continues to rage against the mutated population of Earth, with the code possibly being cracked to finally end the nightmare. Cagaster is a thrilling shonen adventure into a strange apocalyptic universe, somewhere between Mad Max and Attack on Titan. Published by Tokuma Shoten in Japan, Cagaster has been adapted into an Anime series by Gonzo Animation called Cagaster of an Insect Cage under the direction of Koichi Chigira (Tokyo Babylon, Full Metal Panic!, Last Exile) which is streaming now on Netflix!

Set in the far future where a mysterious disease turns humans into giant cannibalistic insects, Cagaster tells the story of an exterminator (as in, someone who kills said insects) called Kidow and the girl, Ilie, he rescues on one of his jobs. Having promised her father that he would deliver her to her mother, he brings her back to his home in E05, an inn where she gets a job as a waitress. This first volume doesn’t have much going for it, story-wise, and it mostly informs us of the setting and the circumstances of the characters. Kidow, being an exterminator (some people consider them murderers as the insects used to be people), and a (presumably) East Asian fellow in South-West Asia, is looked upon with suspicion. There are also some murders of exterminators going on, and he seems to be the next likely target of the serial killer. Meanwhile, Ilie’s PoV is her deciding to stay in the sector E (not that she can get out, considering her home sector A is quite a way from here) and her meeting some kids around. I found the artwork nice enough, but the abundant action scenes feel filler when we don’t have the plot established. Currently, I’m on the fence as to whether to continue with the series.

Received an advance reader copy in exchange for a fair review from Diamond Books, via Netgalley.

One thought on “ARC Review: Cagaster Vol 1 by Kachou Hashimoto”