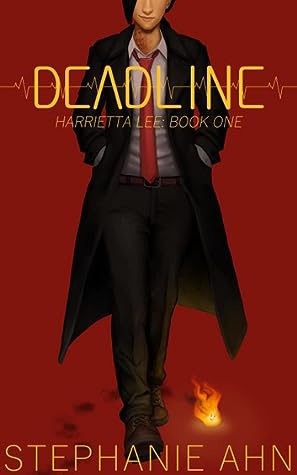 Deadline by Stephanie Ahn
My rating: 4 of 5 stars

Disgraced witch Harrietta Lee has made a lot of mistakes in her life; there’s a reason she’s got a sizable burn scar slapped across the side of her neck and a formal letter of excommunication from the international underground magical community. But who has time to dwell on the past when you’re trying to make rent in New York? Things are mostly clean and simple, until her next odd job is brought to her by a representative of a powerful corporate family—a family she once had close personal ties to. As she unwillingly digs through six years’ worth of personal baggage, she’s also got to contend with an inhuman admirer shadowing her in the street.
But hey, maybe it’ll be worth it for the beautiful women she gets to kiss…

Well, this was an interesting urban fantasy with some dark elements, with a protagonist who draws your whole attention. At the start of the novella, we only know that Harrietta ‘Harry’ Lee is a blood witch who has been excommunicated for some reason, and now she picks up low-level magical jobs like getting rid of love curses, while also tinkering with elemental magic. When she gets a high paying job by the member of a prominent family, whose scion she had personal ties to, and who she now has an estranged relationship with, she accepts the job without informing said friend. The job turns out to be fairly easy for her, despite her suspicions that getting through big magic wards might be difficult for her warped magic (after the aforementioned incident), but the real problem begins when she completes the job, which was to retrieve a supposedly lost magical sword. Along the way, we get a glimpse into the array of magical skills and creatures that this world contains, as well as the innovative ways Harry gets around using hers. There are also mischievous fire sprites, and some guardian creatures that are scary but also adorable; for the most part, the book is about the wonderful magic while also having Harry face against some challenges, make a demonic acquaintance, and get in a whole lot of trouble. The darker aspects of the story come to us towards the end, when we find out about Harry’s past and what got her exiled from the magical family, and I am interested in seeing what the reveals about Harry’s magic mean for the sequels!

One thought on “Review: Deadline by Stephanie Ahn”