Kingdom of the Blazing Phoenix by Julie C Dao

This fairy tale retelling lives in a mystical world inspired by the Far East, where the Dragon Lord and the Serpent God battle for control of the earthly realm; it is here that the flawed heroine of Forest of a Thousand Lanterns finally meets her match. An epic fantasy finale to the Rise of the Empress novels.

Princess Jade has grown up in exile, hidden away in a monastery while her stepmother, the ruthless Xifeng, rules as empress of Feng Lu. But the empire is in distress and its people are sinking into poverty and despair. Even though Jade doesn’t want the crown, she knows she is the only one who can dethrone the empress and set the world right. Ready to reclaim her place as rightful heir, Jade embarks on a quest to raise the Dragon Lords and defeat Xifeng and the Serpent God once and for all. But will the same darkness that took Xifeng take Jade, too? Or will she find the strength within to save herself, her friends, and her empire?

Fans of Stealing Snow, Red Queen, and The Wrath and the Dawn will hungrily devour this page-turning read.

East Asian setting, with exclusively POC characters, written by an Asian author; also has a dwarf character as a love interest 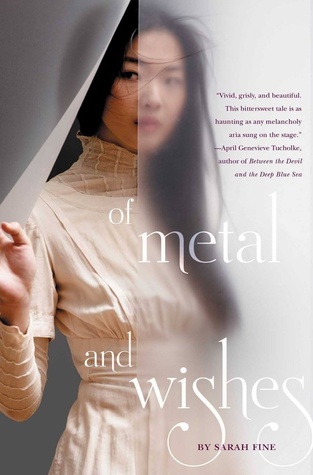 Of Metal and Wishes by Sarah Fine

There are whispers of a ghost in the slaughterhouse where sixteen-year-old Wen assists her father in his medical clinic—a ghost who grants wishes to those who need them most. When one of the Noor, men hired as cheap factory labor, humiliates Wen, she makes an impulsive wish of her own, and the Ghost grants it. Brutally.

Guilt-ridden, Wen befriends the Noor, including their outspoken leader, a young man named Melik. At the same time, she is lured by the mystery of the Ghost and learns he has been watching her… for a very long time.

As deadly accidents fuel tensions within the factory, Wen must confront her growing feelings for Melik, who is enraged at the sadistic factory bosses and the prejudice faced by his people at the hand of Wen’s, and her need to appease the Ghost, who is determined to protect her against any threat—real or imagined. She must decide whom she can trust, because as her heart is torn, the factory is exploding around her… and she might go down with it

Hunted by the Sky by Tanaz Bhathena

Gul has spent her life running. She has a star-shaped birthmark on her arm, and in the kingdom of Ambar, girls with such birthmarks have been disappearing for years. Gul’s mark is what caused her parents’ murder at the hand of King Lohar’s ruthless soldiers and forced her into hiding to protect her own life. So when a group of rebel women called the Sisters of the Golden Lotus rescue her, take her in, and train her in warrior magic, Gul wants only one thing: revenge.

Cavas lives in the tenements, and he’s just about ready to sign his life over to the king’s army. His father is terminally ill, and Cavas will do anything to save him. But sparks fly when he meets a mysterious girl–Gul–in the capital’s bazaar, and as the chemistry between them undeniably grows, he becomes entangled in a mission of vengeance–and discovers a magic he never expected to find.

Dangerous circumstances have brought Gul and Cavas together at the king’s domain in Ambar Fort . . . a world with secrets deadlier than their own. Exploring identity, class struggles, and high-stakes romance, Hunted by the Sky is a gripping adventure set in a world inspired by medieval India.