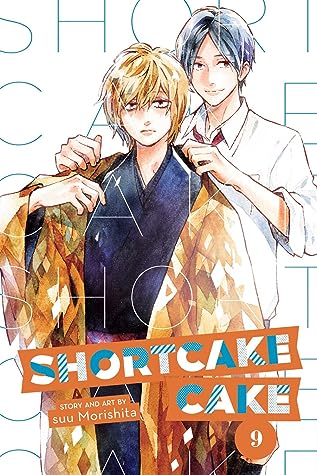 Shortcake Cake, Vol. 9 by Suu Morishita
My rating: 4 of 5 stars

An unflappable girl and a cast of lovable male roommates at a boardinghouse create bonds of friendship and romance.

When Ten moves out of her parents’ home in the mountains to live in a boardinghouse, she finds herself becoming fast friends with her male roommates. But can love and romance be far behind?

Ten plans a Christmas Eve date with Riku and takes him to her hometown. She hopes if Riku learns more about her, he’ll share more about himself and his past.

Shiraoka tells Chiaki and Ten all that he knows about Riku’s past, and the story is quite, uh, dramatic. We already knew from the previous volume that Riku and Rei aren’t related by blood, so it was a reasonable assumption that at least one of them was adopted, and those assumptions are proved right in this book. Riku and Rei were both raised together, but obviously only one was the heir, and though they were close in childhood, Rei develops rivalry later on. With the death of their parents, Rei’s complicated feelings about Riku get to the extreme, and Riku himself is dismayed that his brother would behave like that to him. Riku’s childhood formed a large basis for his personality, and Chiaki and Ten vow to find a way to fix the relationship between the brothers, and also make Riku happy. There is more drama later on by the addition of two new characters but I am keeping them off because SPOILERS.