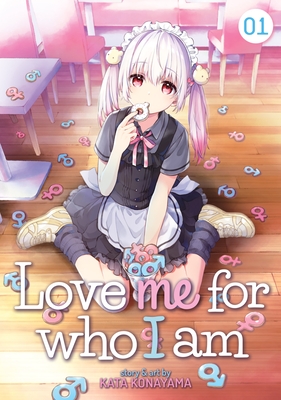 An LGBT+ manga about finding friendship and common ground at an untraditional maid café!

Mogumo is a cute but lonely high school student who just wants a few loving friends. Fellow student Iwaoka Tetsu invites Mogumo to work at his family’s café for “cross-dressing boys,” but he makes an incorrect assumption: Mogumo is non-binary and doesn’t identify as a boy or a girl. However, Mogumo soon finds out that the café is run by LGBT+ folks of all stripes, all with their own reasons for congregating there. This touching manga explores gender, gender presentation, and sexuality from many different angles, including the ways people are pushed to conform in a world that doesn’t understand them…until the world begins to learn, one person at a time.

A manga with a non-binary protagonist is so rare in the mainstream industry but also like, it is about time we have more diverse main characters! The story is about Mogumo, and it is partly from their perspective, and also from their classmate Tetsu’s perspective, whose family member owns a maid cafe that specifically employs ‘otokonoko’, as in, cross-dressing boys. Tetsu, like Mogumo’s other classmates, mistakenly assumes that Mogumo just prefers to cross-dress (they are assigned male, and they wear the skirt version of the uniform) and so invites them to the cafe for a job.

Initially, Mogumo is happy because Tetsu puts it as ‘you will find people like you to make friends’ but upon realizing they all thought them to be male, Mogumo is dismayed and also doesn’t want to use their standard welcome lines where the staff inform the customers they are cross-dressers. Also, another of the staff, Mei, feels that removing the ‘we are otokonoko’ line conflicts with how she (I’m using she/her because the character has professed desire to be seen as female not male) wants to be in the cafe. They both have an argument, but come to an understanding about how they all will present themselves to customers.

Mogumo’s challenges are not done, though, when they realize they like Tetsu, but since they are considered male by their peers, their relationship with Tetsu will be considered a gay (as in boy-boy, not boy-nb) relationship, which is another set of complications. Tetsu’s seen his older sister (he calls him brother, but she is a woman by her own declaration, so I will say sister) face people’s ridicule as a kid for being trans, so he himself is wondering about a relationship with Mogumo. Meanwhile a new rival appears in front of him for Mogumo’s affections, and I was like oh no yandere. Mogumo, meanwhile, probably is feeling presenting as female would eliminate some of the problems they would have in a relationship with Tetsu, and I am wondering what direction that story arc would go.

One thing to understand here, primarily, is that by the author’s note, it is evident that the author is not non-binary, so while the discussion about trans identities can also be ridden with some incorrect terms (from a queer discourse standpoint) and is also prone to misgendering. Like I mentioned above, Tetsu’s older sister is referred to as his older brother by him, despite said sister saying she is female. Mei’s conflict is understandable, at least, because she is still sorting out her identity, but she is also stuck between being female and being considered male by everyone else, and so has internalized it as ‘but I am still a boy’. There’s Suzu, who loves to dress in cute clothes and has a boyfriend (it is mentioned that he likes to dress femme for said bf), but from context, it might be that he is truly just a cross-dressing boy and not trans; or they are genderqueer, who knows? Being cis, I cannot entirely be sure about whether the rep is correct, but I am going by what I know.

The main theme of the book, anyway, is mainly like the title says – ‘love me for who I am’ – and is more about being accepted for how they are. The artwork tends more towards moe, and honestly the characters look younger than they are (I thought they were in middle school, not high school). The tone is more light-hearted and cute, but also with a lot of validation and discussion about the different gender identities of the staff of the cafe.