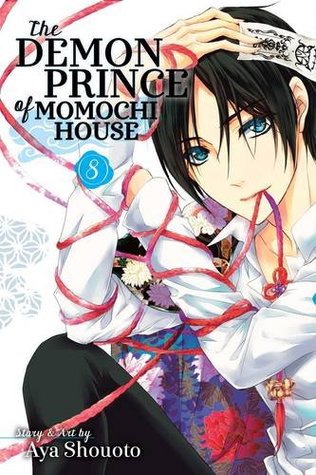 The Demon Prince of Momochi House, Vol. 8 by Aya Shouoto
My rating: 4 of 5 stars

Himari Momochi inherits Momochi House, an estate which exists on the barrier between the human and spiritual realms. Since his battle with Nachi, Aoi has been unable to transform back from being the Nue. Aoi must recover his lost human memories, and Himari enters the spiritual realm to retrieve them

This book delves further into Aoi’s past, before he was directed to go the Momochi house; it tells about his childhood as being able to see and interact with ayakashi and the ‘siblings’ he had; it also tells about him after his mother’s death and his step-mother who was terrified of a child who claimed to see spirits. Himari suspects it is remembering the past that will allow the Nue to transform back into Aoi, but she also feels that maybe it is upto Aoi, despite all her efforts. There is a lot to unpack about the Nue-Aoi thing, to be honest, from the demarcation between the two (if there is one), to what is going through Aoi’s mind when it comes to what side he wants to stay on. The Nue’s deal with Kasha is something that I wish was more clear – I am confused as to what is going on there, and how the latter can just waltz in into the house, but the Nue can’t go out.