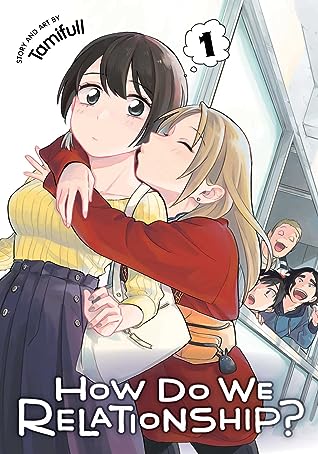 How Do We Relationship?, Vol. 1 by Tamifull
My rating: 4 of 5 stars

A romance of convenience between two college women soon becomes the real thing.

Shy Miwa has always dreamed of finding love, but living in small-town Japan made finding the right match difficult—especially since she likes girls! Even going away to college didn’t seem to help, until one day her outgoing classmate Saeko suggests they might as well start dating each other since it’s not like either of them has other options.

At first it seems like things won’t work out as their personalities clash and misunderstandings abound. But when their casual friendship starts to become something more, Miwa begins to wonder—can a pragmatic proposal lead to true love?

Note: This is more new adult than young adult, as it has college aged protagonists and relevant themes

How Do We Relationship has a slightly different direction for a yuri – it has two girls getting into a relationship as friends and then working out the romantic and sexual aspects of their relationship. Miwa had never been in a relationship before, and she thought college would be a good time to find it – but heteronormativity means everyone assumes she is straight, and because she is hot, guys are the ones surrounding her. Saeko was her first friend in college, and both of them join a band with three other guys (some of whom are crushing on Miwa btw) and Miwa is content hanging out and having fun with them. After one such hangout, with both slightly drunk, Saeko confesses she is a lesbian, and Miwa admits the same, to which Saeko proposes that the two of them start dating each other, because how often do you find another queer person like you?

Miwa’s and Saeko’s relationship goes through a lot of awkwardness, difference in opinion and some misunderstandings. Miwa, being inexperienced, cares much about supposed milestones, while Saeko is more impulsive. Saeko is also more eager for the physical stuff, while Miwa is hesitant; this makes Saeko worried that she is pressuring her. Then there’s the fact that Miwa wants romance, while Saeko is so casual about things, she overlooks all that stuff. It’s not that Saeko is not into it – she definitely gushes about Miwa internally, and she is anyway pretty loud about how much she likes Miwa, but Miwa also feels hesitant and unsure of because of HOW their relationship started. It was an interesting journey through their issues, both between them, but also about how to come out of the closet together to their friends. Surprisingly, Saeko is the more reserved one on that front (because of things that happened to her in middle school) while Miwa is more inclined to trusting her friends optimistically. One of their friends, Rika, is, in two words, a chaotic fool, and we get her PoV, too, as she was the cause of one of their misunderstandings; she also makes some problematic statements, but that are dismissed in the natural course of the book.

Overall, it is sweet, hilarious, but also contemplative about the nature of relationships and how to work through difficulties and differences.

Is it diverse? lesbians in a sapphic romance