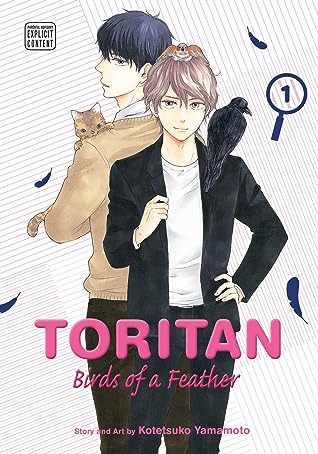 Toritan: Birds of a Feather, Vol. 1 by Kotetsuko Yamamoto
My rating: 3 of 5 stars

Birdsong starts sounding like a love song when bird whisperer Inusaki meets a crow that sounds oddly like a handsome young man he knows!

Inusaki can communicate with birds—and some of them are real jerks! Tired of the incessant chatter, he spends most of his day tuning them out. That is until the day he meets an intriguing and strangely handsome crow he just can’t get off his mind!

Inusaki, a detective and unwitting jack-of-all-trades for his neighborhood, has the unenviable ability to communicate with birds…and hates it. Yet when he runs into a crow that knows his name, he can’t help but befriend him, naming him “Kuro.” Later, when Inusaki seems to hear Kuro’s voice, he finds only the landlord’s son. Why do they sound so similar, and why can’t Inusaki stop blushing whenever Kuro the crow crosses his mind?!

The main character of this manga, Inusaki is a bird whisperer, but he doesn’t like birds much. Who would, when you can hear exactly what they are talking about, plus some of them can aggressively threaten you, too (pigeons are badasses lol). So Inusaki does odd jobs in his town (though, he is professionally a private detective), and sometimes he has to do jobs that concern birds; the birds usually are terrified on learning he, as a human, can speak to them. When he comes across a friendly crow, who later on helps him help a set of birds, he is surprised that the crow can put aside his instincts; he also finds the crow pretty cool (and imagines him as a cool older guy) and develops a crush on him. I know – even I snickered at that.

Meanwhile, he notices that his landlady’s son (who also owns the cafe he frequents at) has a voice similar to the crow. And this quiet fellow, Mitsuru is popping up frequently in his life, so he is intrigued by the similarity. He also discusses his crush and heartbreak with him, and finds the latter’s advice quite helpful. Now, so far, so good – but what the synopsis doesn’t tell you is that Inusaki is 23 and Mitsuru is 17, so yeaaaaaahhhh, this romance already is has me noping out.

Which is a shame, because the story, and especially its protagonist, Inusaki, are entertaining and adorable. Honestly, Inusaki’s interactions with birds alone was so funny, and enjoyable, I would be satisfied with that alone as the central storyline. The artwork is also nice, and the storyboard is brilliant at landing the jokes.