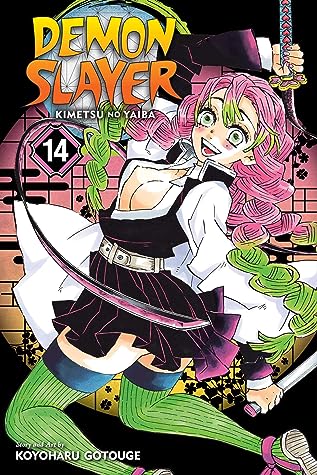 Demon Slayer: Kimetsu no Yaiba, Vol. 14 by Koyoharu Gotouge
My rating: 4 of 5 stars

Tanjiro’s sword is still not ready. The swordsmith Haganezuka tries to concentrate on finishing while Tanjiro and his friends engage the two upper-rank demons, Hantengu and Gyokko, in a ferocious battle. Hantengu continues to create different forms to attack the Demon Slayers. Meanwhile, the Mist Hashira Tokito regains his memories of the past and confronts Gyokko, but what will these memories reveal?

This book shifts the focal characters from Tanjiro to the Mist and Love hashiras, who are engaged in this battle against the two upper rank demons along with him. Another action-heavy installment, the story still occasionally goes back into the past to tell their stories, while also advancing their individual character arcs. It is honestly quite difficult to go into the battle, because so much happens! We find out what was going with Genya, what is Kanroji’s (the Love hashira) special talents, what lies in Tokito’s past – and while we have them facing against two demons, thus having them all go to their physical limits and employ different styles. We also get some hints as to these special powers occurring, and I am eager to find out more and if my theories are realized in further books!