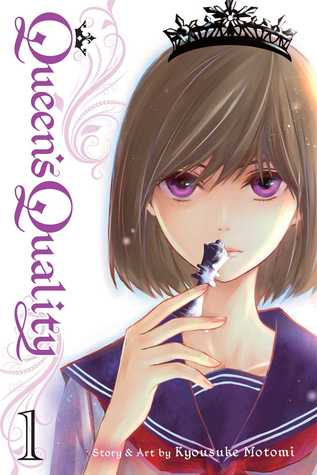 The adventures of mind Sweepers continue in this supernatural romance!

Fumi Nishioka lives with Kyutaro Horikita and his family of Sweepers, people who specialize in cleaning the minds of those overcome by negative energy and harmful spirits. Fumi has always displayed mysterious abilities, but will those powers be used for evil when she begins to truly awake as a Queen?

Fumi has never shown much romantic interest in Kyutaro, the quiet but formidable Sweeper who may be the only one who can keep Fumi’s power under control. But when Kyutaro tells her that he’ll never leave his side, she unexpectedly starts to fall for him!

With Fumi’s power as a Queen revealed at the end of the QQ Sweeper series, this one focuses on that, with the Bug Handlers as the main antagonist. The Horikitas have concluded that her ‘curse’ may very well have been the machinations of these Handlers, to awaken the Black Queen inside her. And in this book, too, they attempt to do just that. Seems like Fumi’s main arc is to resist the Black Queen’s power inside her, though it is heavily implied that the White Queen’s power is somewhere deep within her too. Meanwhile, Kyutaro sets himself up as her protector, and he is pretty sure she is his childhood love Fuyu – how she lost her memories is another mystery at this point, though.

I am liking the artwork better in this series – I feel like there is more detailing in some panels, I guess? As for the story pace, much like QQ Sweeper it is rushing things quite a bit for one book – once again, we are introduced to a new infected (which usually involves a whole story about the person) and then the cleaners (Kyutaro and Fumi) have to go in, though this time, Fumi gets overwhelmed by the evil miasma whatever. Seems to me like it would be better to NOT have her go in those situations, unless it is like ‘desensitization’ kind of exposure they are hoping for. Also, why is no one discussing about how Kyutaro is now her ‘consort’? Where did that come from? Is it just because he pledged to protect her?

The ‘infected’ in this book follows the pattern of the previous ones – someone who is a bully, primarily. Though, I gotta say – the frequent examples of insects are shown around girls gossiping and being malicious to other girls, which, uh, has me thinking a bit. Not that bullying isn’t harmful, but there are ALSO various other evil things in the world, so focusing only on high school toxicity, specifically about girls, is, well, getting repetitive. Still, I like the story set-up so far, and am looking to see where it takes Fumi’s story arc.

Start with the QQ Sweeper series