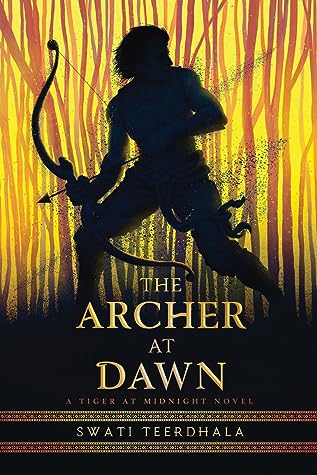 The Archer at Dawn by Swati Teerdhala
My rating: 4 of 5 stars

A stolen throne. A lost princess. A rescue mission to take back what’s theirs.

For Kunal and Esha, finally working together as rebels, the upcoming Sun Mela provides the perfect guise for infiltrating King Vardaan’s vicious court. Kunal returns to his role as dedicated soldier, while Esha uses her new role as adviser to Prince Harun to seek allies for their rebel cause. A radical plan is underfoot to rescue Jansa’s long-lost Princess Reha—the key to the throne.

But amidst the Mela games and glittering festivities, much more dangerous forces lie in wait. With the rebel’s entry into Vardaan’s court, a match has been lit, and long-held secrets will force Kunal and Esha to reconsider their loyalties—to their countries and to each other.

Getting into the palace was the easy task; coming out together will be a battle for their lives. In book two of Swati Teerdhala’s epic fantasy trilogy, a kingdom will fall, a new ruler will rise, and all will burn.

In this book, with the Sun Mela approaching, Esha and the Blades are preparing to get Reha out. Kunal is working along with Esha and the Blades to help them with their mission, but it also means he has to put his principles and ideals against the tasks required. Meanwhile, Esha has her need for revenge working against her job as the leader of the Blades. Combined with the political plots, this book makes for a tense and exciting sequel to The Tiger at Midnight.

I didn’t know I could love Kunal and Esha more, but apparently Teerdhala knows just exactly how to make their chemistry shine, but also introduce conflict to keep things a bit tense. Them working together for the Blades’ mission means they have to keep their relationship (and their flirtation) on the DL in front of others, but come on, everyone can see the heart eyes from Kunal. Speaking of Kunal, he is such an awesome character, balancing both the serious soldier side and the caring side.

Where did Kunal fit in that story? He wanted to be the hero, but he felt lost in this world of politics and alliances. He felt like a soldier of old, clinging to his duty to protect, his desire to change the world.

He and Esha have a difference in perspective when it comes to spy activities, and it is an interesting aspect that is explored, especially when she doesn’t always share information with him (which I get, because she is the leader so it is at her discretion). She, meanwhile, is so close to getting her revenge, but time and place have her being thwarted from acting on it; nevermind that since they are political delegates in Jansa, she can’t exactly disrupt peace talks with a murder. Her relationship with Harun was also given its due, and with their history, they had some things to work out.

“And who are you, Esha?” She was the Viper. An orphan. Or that’s what she would’ve said. But these past months with Kunal had shown her a glimpse of something more, something complex and whole and dangerous. Hope. And it was terrifying because the moment she reached for that hope was the moment she had to stop living in the past and had to face the future. Who did she want to be?

The politics in this book were the driving force of the plot, with the Dharkan royalty and retinue in Jansa for negotiations along with another country that they both used to war with. Things are well, tense, as you’d expect, but with so many parties involved, the question of whose motives are going to act against whose motives, and what motives they even had, is very much the basis for the intrigue. Like, there was a part towards the end that was basically them all having a stalemate in the middle of the throne room. And that ending! There were so many reveals (some quite surprising and some hitting you out of nowhere) that I was momentarily overwhelmed as I re-calibrated my understanding of some characters. But also I have to say one thing – everyone stop putting the entire blame on Kunal, okay?!

Previous books in The Tiger at Midnight trilogy