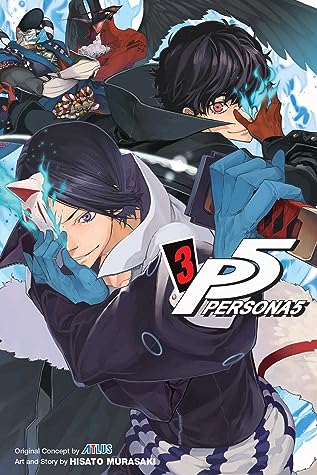 Based on the popular video game, this manga’s phantom thieves will steal your heart!

After being arrested and having to transfer to a new high school in Tokyo, Akira Kurusu is given the goal of rehabilitation and awakened to a new power-the power of one’s true self, a Persona. Using his Persona and the mysterious navigation app Mementos, Akira and his friends take on the role of phantom thieves, saving people from the twisted desires of those around them.

After successfully changing Kamoshida’s heart, Akira and his friends decide to continue operating as the Phantom Thieves. Not long after, they meet famous Japanese artist Ichiryusai Madarame and his student Yusuke Kitagawa. The Phantom Thieves hear rumors that Madarame might be up to some shady stuff. Ann accepts Yusuke’s request to model for him in the hopes that she can get some information out of him, but Yusuke refuses to hear it! Will the Phantom Thieves be able to expose Madarame’s crimes? And what is the startling truth about Yusuke’s past?

With the Phantom Thieves deciding that they are going after big targets, they find a perfect candidate in a famous artist, Madarame, who they suspect (well it is quite certain) has been abusing his students and plagiarizing their art. Akira suggests caution, and finding proof first, which is why they use Ann as an in with Madarame’s current student, Kitagawa to find some proof. Kitagawa is very insistent upon Ann being a model for him, but Ann is hesitant since he is so intense (and also because he wants a nude). Nevertheless, they devise a plan to have entry to Madarame’s secret door in his house (which is impenetrable in his mind palace), but he is a very cunning and also difficult person to defeat. Madarame’s and Kitagawa’s complex relationship is a major arc in this book -Kitagawa was raised by him, him realizing how much he is lied to, and how much he himself ignored means they get another ally in their fight against abusers. A painting by Madarame is also at the crux of a big secret he has been hiding, and with the book ending on a cliffhanger, I have a theory (well, more like an expected trope) but I am still eager to know how it will end. I must say, though, the ease with which they get their hints and their evidence sometimes makes me sigh in exasperation.

Previous books in the Persona 5 series