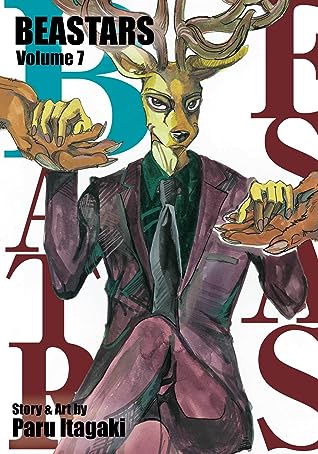 At a high school where the students are literally divided into predators and prey, friendships maintain the fragile peace. Who among them will become a Beastar-a hero destined to lead in a society naturally rife with mistrust?

The Council of Living Beings is changing the criteria for Cherryton Academy’s next Beastar. When gray wolf Juno tries to convince red deer Louis, the prime candidate for the honor, to return to school, their relationship takes an unexpected turn. Meanwhile, gray wolf Legoshi’s relationship with dwarf rabbit Haru is shifting too. Will they grow closer or further apart? Then, Legoshi is blindsided by a huge, mysterious assailant! What new skills will he need to learn to protect himself, let alone his friends…?

With this book, we are diving back into what started this series – Tem’s murder. As the secret council of creatures pressures the Cherryton Academy headmaster to pick a Beastar already, Loius, the main contender has been living with the Shishigumi and we get to see a bit more of what they are doing, and what is going on with Louis. Legosi has been settling back into regular life, but when he is approached by a fan (ahem) to look into Tem’s murder, he is pulled into the simmering dispute between herbivores and carnivores in the school. More importantly, it is made known to us, as readers, that the murderer is quite possibly someone in the drama club, and who Legosi is friendly with. (I have my doubts on Bill, btw) Legosi is also reassessing his relationship with Haru, after he gets teased by his carnivore club members of being a perv who like small herbivores, and he comes to a decision regarding what he wants and what is possible; although, their last scene puts forth more questions! Legosi’s investigation into the murder could have been more subtle, as evidenced by what happens when he starts digging.

The theme of strength is played off the many characters of this series quite well – is strength just the power of a carnivore, is it the refusal to live powerlessly, is it adapting to what society is, is it looking at the truth and finding your place in it, or is the power to change things. A world in which one set of creatures are food for others, and the other set has a flimsy lid on their instincts, what is right – this is a question that Louis and Legosi are grappling with, but also is seen in the character arcs of Haru, Juno and hell, even Ibuki. I’m loving the forays into how the nature of their world affects these characters that Itagaki is doing so well, and also how much character-driven this is.

One thought on “ARC Review: BEASTARS, Vol. 7 by Paru Itagaki”