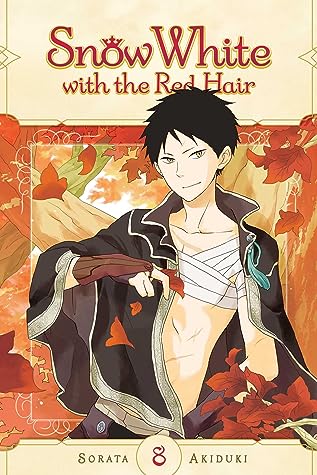 Snow White with the Red Hair, Vol. 7 by Sorata Akiduki
My rating: 4 of 5 stars

Shirayuki is an herbalist famous for her naturally bright-red hair, and the prince of Tanbarun wants her all to himself! The prince from the neighboring kingdom, Zen, rescues her from her plight, and thus begins their love story.

Shirayuki and Zen finally have “the talk” about their future together. Then, a heavy rain forces the party to take shelter at an inn after seeing off Sakaki. But just as night falls, Obi slips away!

Zen’s and Shirayuki’s relationship has progressed enough that Zen is confident to make her his princess, and has basically proposed to her. Izana’s questioning of their relationship has also brought it out into the open, with Zen facing up to his brother to declare his intentions. Coincidentally, Shirayuki’s recent support from Raj and him granting her a title bolsters her standing a bit, not that it matters to her or Zen, but would help in court. Amusingly, Mihara now offers to adopt her into his family so that she can have a noble status. However, Shirayuki is content with being an official court herbalist anyway, and now she and Ryuu are being sent to a norther outpost to gain more information from there. Izana also tricks Zen, and goes there on his own mission, which we have yet to see.

The main focus of this volume, though, is Obi! Obi’s past as a mercenary plays a part as the group stop at an inn while traveling, where another guest is flirting with Mitsuhide. Turns out she is an acquaintance of Obi’s from his past, and this interaction brings forth the discussion about Obi’s current position. Obi is quite happy being Zen’s aide, but it becomes apparent how much he loves them both (that sound you heard was me screaming for the OT3) and how content he is being loved back by them. There’s also hints to Mitsuhide and Kiki maybe being a thing (that sound was me screaming for this ship to rise) but also it isn’t clear what they are.

On the whole, loads of love in this book! But also the starting of a new arc in the northern region of Wistalia. Also, I have to mention those beautiful winter clothes – the clothing design is once again on point!