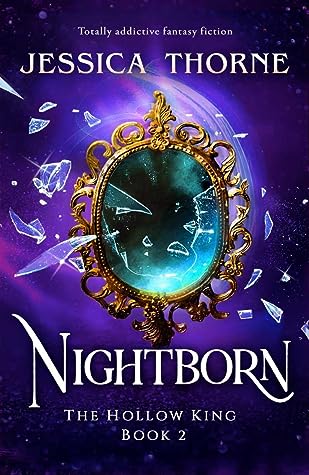 Nightborn by Jessica Thorne
My Rating: 4.5/5

Like deep dark water, it pulls them down. The faint fire of magic within them flickers and dies. Their eyes turn black as night. They are nightborn now.

Grace Marchant has been many things: streetwise orphan, rebellious servant, and now beloved companion of Prince Bastien, heir to the throne of Larelwynn. But their sunlit happiness is not destined to last. The golden magic which brought them together in purest passion is threatened by strange and ancient forces. Innocent people are becoming nightborn – cruel, deadly, unrecognisable to their loved ones – and these two young lovers are the only ones with power enough to stop it.

In times of peace, striking a deal with their closest enemy would be unthinkable, but now their only hope is to ally with the neighbouring Valenti royal family: manipulative, cunning, and always with an eye on the Larelwynn throne. The partnership comes at a devastating price… if Grace wants to defeat the nightborn, she must watch Bastien marry a Valenti princess.

Grace knows she must make this heart-wrenching sacrifice for the good of the whole kingdom – but she also fears the magic in her veins, usually so warm and bright, is turning cold as deepest midnight. A beguiling darkness whispers to her from within. Is Grace herself becoming nightborn?

Time is running out. With Bastien promised to another, and a stony distance growing between them, will Grace find the source of the nightborn curse before every last soul is consumed by the darkness?

I received this book from Netgalley and Bookouture in exchange for an honest review.

“The Deep Dark is coming, and all the Nightborn will be coming with it.”
“Coming?”
“For me. For you. And for everyone we love.”

Can I just say how much I waited to read this book the moment I received the news it was ready to be released? It’s been only 3 months since I read Mageborn and the continuation is here! That my babies, Bastien and Grace, are here and I can succumb to my foolish weak emotions and dive back into their world straight away with my mind fresh and ready to swallow the pages one by one. I just love Jessica’s writing; it is my very own drug. I guess that’s how Aurelie feels… Magic is addicting 😉

He had a heart that would look after this whole world even if it killed him.

It’s been exactly three months since Grace and the gang escaped from Aurelie, Asher and Celeste clutches and spoiled their plans for at least a little while. Grace got so much on her shoulders now, the protection of Bastien and her friends, the future of the kingdom and how they going to usurp Aurelie and now a malevolent power raising thanks to Bastien saving her from the brink of death. Things aren’t great at all, not only they are housed in another country seeking an asylum and trying to gather forces so Bastien can claim the throne the mageborn are starting to lose control. It’s not another Hollow outburst, no… The Deep Dark is back and is rapidly changing the mages one by one, including our beloved Grace.

You could be so much more. If you just had the courage to reach out and seize it. It’s waiting for you. There’s a sacrifice, of course. But everything worthwhile demands a sacrifice. Especially magic.

This book isn’t kidding around if you thought the stakes were high in the previous title think again. Jessica Thorne is here to torment us with so many conflicts and angst that for some time I forgot to breath. I thought I was in one of those exceptionally movie screening of David Lynch movie and just when I thought I comprehend what was happening, she push me off my chair and then my heart was panicking. Grace have to put her duty before her own happiness, Bastien dealing with his own identity and what was his past which has huge gaps in it, Ellyn been uncomfortable been back to her own home country at the control of the Valenti royal family and Kurt, Daniel’s brother trying to be a huge thorn in Aurelie butt while buying the gang some time.

You aren’t just following Bastien and Grace POV anymore but everybody which appreciate since now we get to enjoy the perspective of so many characters like Daniel, Kurt, Ellyn, HACK even the bad guys Aurelie and Celeste which were my favorite to explore. Aurelie was quite an enjoyable little villain and seeing her shine more in this book was a blessing. Celeste still a huge wild card and she wasn’t undermined and became a vital part for the final act too. More depth to the world and the magic, the history behind the hollow king was revealing and it was mind blowing. I enjoyed this, and if you loved Mageborn you’d love this one too 🙂