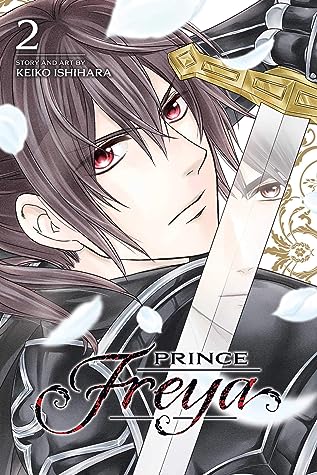 Prince Freya, Vol. 2 by Keiko Ishihara
My rating: 3 of 5 stars

To save her kingdom, a simple village girl must live a royal lie.

The powerful kingdom of Sigurd has slowly been conquering all the lands that share its borders, and now it has turned its voracious attention to the small, resource-rich Tyr. Tyr cannot hope to match Sigurd in strength, so in order to survive, it must rely on the intelligence, skill and cunning of its prince and his loyal knights. But should their prince fall, so too shall Tyr…

Freya finds her charade as Prince Edvard difficult to maintain as she battles her own crushing grief and treacherous Tyrish nobles. With the help of her dear friend Alek and her new guardian Sir Julius, however, she’s determined not to give up. But will her new resolve and impulsive nature send her straight into the jaws of danger?!

The second volume brings more challenges for Freya, who is brought in the middle of the plot to free the Sigurdian. Alek and Julius follow her, and they are staying at a nobleman’s manor, where Freya meets a maid who inspires confidence in her. Freya later on even rushes to her rescue, declaring a trial by combat against the noble, where she uses her newly learned skills, as well as her ideas of what the prince would do. However, there is much more than a simple duel to fight, as she realizes that the noble has betrayed the prince, and she has to rush to protect her soldiers from battle. I like her growth , and so does Julius, who is starting to gain a little respect for her; he is also aware of Alek’s feelings for her, apparent by him teasing him over it. Personally, I am not invested in any romantic subplots as of now, and would rather it be kept for later, as Freya’s transformation into the prince feels like a much more substantial and interesting plotline.