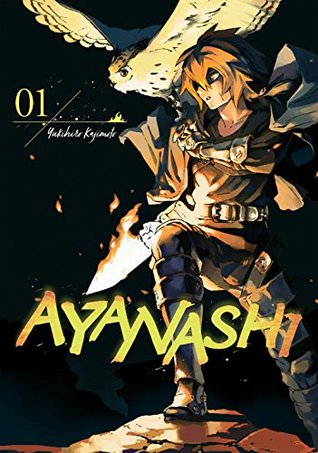 In this world, humanity has been driven underground to live like moles, hiding from the fearsome monsters which roam the surface. The monsters are impervious to every sort of weapon known to man. The only ones with the power to defeat them…are the Ayanashi. One day, in one such underground city, a pair of siblings encounter a mysterious boy covered in wounds. The boy introduces himself as Holo, and in the following days slowly opens up to the pair…until a monster from the surface descends upon the city, laying waste to everything in its path. Holo stands to face the threat, brandishing a flaming short sword attached to his right arm. And so, the story of bringing light back to a world of everlasting darkness begins.

Many Video Games Designers ends up one way or another creating their own IPs during their time. Some more successfully others are butchered because of poor plannings and executing the project. Ayanashi is a manga that’s remarkably unique with its setting but it’s not anything you never saw before in the Shonen genre. In fact one of the many reasons people avoid reading the book its because it’s been labeled as another Attack On Titan clone. Let me assured you that Ayanashi might share some similarities but they aren’t. First of, our story is set underground, humanity is now divided in sectors, afraid of ever above the surface after a calamity ruined the old world. There’s dangerous monsters lurking outside, some thought of them as mere grandma’s tales but it’s all true, the Ogres are real and only the ever so seclusive Ayanashi can fight them.

Right away I liked the setting because I’m a sucker for a dystopian setting and interesting artwork especially thanks to Yukihiro Kajimoto experience on JRPGs like Infinite Undiscovery and Star Ocean series. He knows how to craft memorable monsters and characters and for that I am going to keep reading plus what the hell happened to the protagonist, Holo and why his brother (shocker, lol) was murdered. The series was wrapped after 4 volumes only but still try and picking the first book in the series. You might have a nice brief action read if you just let assumptions aside 🙂