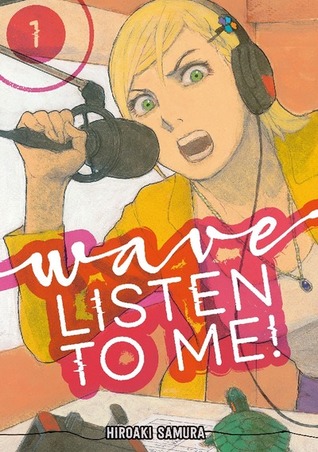 From manga legend Hiroaki Samura, creator of Blade of the Immortal and Die Wergelder, comes something completely different, the journey of one disgruntled young woman’s journey into the wild rapids of talk radio!

The stage is Sapporo, Hokkaido. One night, our heroine, Minare Koda, spills her heartbroken woes to a radio station worker she meets while out drinking one night. The next day, she hears a recording of her pitiful grumbling being played live over the air. Minare storms into the station in a rage, only to then be duped by the station director into doing an impromptu talk show explaining her harsh dialogue. With just one recording, the many eccentric facets of Minare’s life begin to pull every which direction as she falls ever deeper into the world of radio.

Trigger Warning: a character is outed

I Received this advance reader copy in exchange for a fair review from Kodansha Comics, via Netgalley.

Hiroaki Samura is an interesting man in the publishing world of manga. He is widely known for his unique traditional artwork that has no digital touch on them and his most famous series he ever wrote, Blade of the Immortal. I got personally obsessed with the man the moment I tried to read the first chapter of Blade of the Immortal and I had not regretted it. He has more notorious works that you perhaps haven’t heard from like Die Wergelder, Bradherley’s Coach, The Loitering Snow, Ohikkoshi and Hiroaki Samura’s Emerald and Other Stories all of which are different takes with a personal touch of Hiroaki’s realistic pencil work and captivating narration. But then comes a time when a creator makes something you are simply not sure what it’s about. Exactly like the creator himself who confesses about it.

Wave, Listen to me! is centered around a young waitress who one night gets so drunk she share her most inner views to a stranger who is a radio broadcaster producer after she got dumped recently by her ex-boyfriend. He sees opportunity and takes this fiery confession of hers and surprise surprise, everyone and their mother, hears Minare and now she is a big hit. Minare now widely acclaimed is showered with praise and perhaps a change in a career, dealing with past co workers and diving into this new territory she has no idea what will happen once she’s on air. Honestly, it sounds like a pretty good premise for a comedic romantic Josei series but it’s labeled as a Seinen. I respect Hiroaki and adore whatever he is doing but with this one I am not entirely sure what was happening.

The premise on its own is intriguing sure but the jokes are hit or miss for sure but the artwork are mesmerizing as always and keeps you glue to the very last page of the volume but how can you take this plot so seriously? Minare is a fine lead but this story feels more like a novella then a series but who can tell. It is only the beginning so why not give it a try and pick up the first volume. You won’t be disappointed 🙂