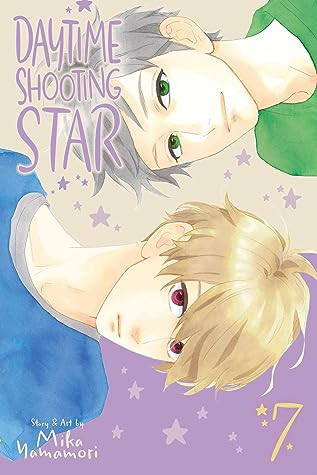 After arriving in Tokyo to live with her uncle, Suzume collapses in a nearby park where she had once seen a shooting star during the day. A handsome stranger brings her to her new home and tells her they&;ll meet again. Suzume starts her first day at her new high school sitting next to a boy who blushes furiously at her touch. And her homeroom teacher is none other than the handsome stranger!

Suzume has moved to Tokyo and is living with her uncle. Suzume and Mr. Shishio take a trip together for the first time. But something weighs heavily on Mr. Shishio’s mind. Meanwhile, Suzume’s worried about being caught on a romantic outing with her teacher.

Okay so I knew the heartbreak was coming but it still hit me quite a bit. The whole book is a slow decline of the relationship between Suzume and Shishio, and while I am glad it went there, I still feel for Suzume’s pain. She had already accepted the fact that she and Shishio can’t be a couple publicly, so she hides the relationship from all (except Yuyuka, the cheerleader for the wrong thing). With her disappointment at Christmas, and the New Year begun, she hopes that maybe he can go for his first shrine visit of the year with her, for which she chooses a shrine far away. But troubles start when she becomes cautious about them being seen together, which irritates him, and when they are stranded there due to snow and have to spend the night (in any other instance, I would have screamed at the ‘there’s only one room’ trope, but…) which amplifies the tension between them.

Moreover, Shishio himself has begun to think about what he is doing, and when her uncle finds out, he has a talk with him. Now, I wish the uncle would have been more like ‘she is 16 you ass’ but he gave a reasonable talk on how Shishio can’t be there for her, she has much life ahead of her, etc etc which further cements Shishio’s resolve. But man, seeing her heart break was painful, and while Mamura is waiting in the wings, I liked that he sent in Yuyuka to comfort her instead. Yeah, so the exploration of how the relationship affected her, how it didn’t give her what she needed even if she had what she wanted – I liked that. I don’t like Shishio any better with this volume, but I hope he matures more from this point onwards.