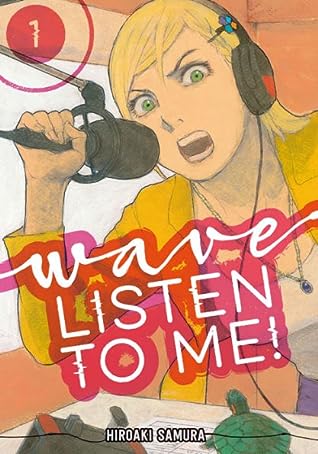 From the legendary creator of Blade of the Immortal comes something completely different: the wild ride of one disgruntled young woman down the rapids of talk radio!

Minare thought she was just venting to a stranger when she told a guy at a bar about her man troubles. It turns out that man works at a radio station, and the next day she’s shocked to hear her grumbling broadcast on the air! She storms the station in a rage, only to be duped into joining a talk show, and her acid tongue makes her into an instant star!

Warnings: a character is outed

I’ll start with the funny story about me picking up this manga and reading it – I was interested
because, hey, there is an upcoming (at the time I got the book) anime about it, and also, a young woman debuting in radio despite being an amateur sounded like an interesting plot; I read the synopsis on Netgalley, not the one on Goodreads so the author’s name didn’t really click for me. The art sytle tended more towards a semi-realistic style than general manga, or even in the josei genre, and I was like – huh this is sorta like the Blade of the Immortal in style, and lo and behold, after reading it and updating it on Goodreads I was like, wait, this IS FROM the guy who did Blade of the Immortal, which totally gave me whiplash because the tone of this one is so different from it! Anyway, yeah, so that was a surprise, mostly because of my inability to remember names.

Moving on the review of this manga, it is, as said, a comedy josei about a waitress, Minare, at a curry restaurant, who, when duped and dumped by her long-term boyfriend, rants about it drunkenly to a stranger at a bar, and then hears that same rant being broadcasted all over Hokkaido by a radio station. Turns out the stranger was a radio show producer, and he invites her to host her own show, because he sees innate talent (she is very good at speaking without stammering or stuttering) and a unique voice; Minare isn’t sure if she should take up the offer, but since her job at the restaurant is already on the rocks, she wants to try it out. This first volume introduces the characters, the loud boisterous and impulsive Minare, her co-worker Nakahara who subtly not-so-subtly wants to marry her and have them become a curry power couple, the radio producer, and an assistant on the radio station who takes in Minare as a roommate and becomes friends with her, as well as a shady neighbour, the owner of the restaurant, and many more minor characters who might have something bigger to add to Minare’s storyline hopefully soon.

The highlight of the story is Minare herself, who is an absolute disaster of a person; she is also pretty imaginative, spinning stories on the fly, and quite opinionated (which sometimes does get her in trouble). She is also pretty random, going on weird tangents, and well, it can get a bit confusing sometimes. I don’t know in which direction the storyline is heading at this point, and it is anyway too early to tell, but since the humor and jokes don’t land well often, I feel it could have been better served in a 4-koma style, to bring out the random nature of Minare’s bursts of dialogue.