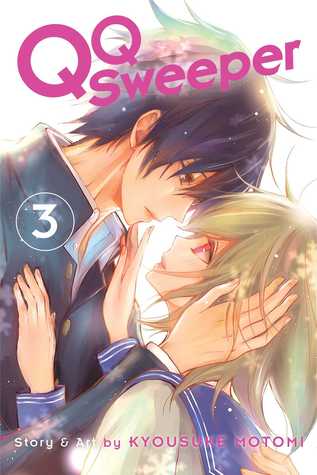 QQ Sweeper, Vol. 3 by Kyousuke Motomi
My rating: 3 of 5 stars

One day, Kyutaro Horikita, the tall, dark and handsome cleaning expert of Kurokado High, comes across a sleeping maiden named Fumi Nishioka at school… Unfortunately, their meeting is anything but a fairy-tale encounter! It turns out Kyutaro is a ‘Sweeper” who cleans away negative energy from people’s hearts-and Fumi is about to become his apprentice!

Fumi still has no memory of her past, but she begins to feel a sense of calm working and living with Kyutaro and his family of Sweepers. But when a Bug Handler goes after her, how will she overcome his dark manipulation?

For a final book in the series, this one packs a lot of stuff in it, introducing the antagonist, having a whole arc around said antagonist, and then introducing a new element to carry forward into the next series. As such, I feel it was very rushed in its execution, whether it be the plot, the lore, or the romance.

Fumi is told that her attack was not random but probably planned by a Bug Handler who is targeting her. Kyutarou suggests that even her curse might be fueled by the actions of said Bug Handler to keep her isolated and in turmoil; why though is something we find out in this volume. The Bug Handler manipulates his way into the circle of her classmates as a medium and tries to set them against her, and then breaks one of them to achieve his means. Fumi, along with Kyutarou and Sendai, have to take a challenging sweeping operation into said girl’s mind to help her, but the darkness within her is quite deep, and pushes at Fumi. At a crucial moment, Fumi realizes her potential, which honestly raises more questions than give us answers, but I guess all that is to be in Queen’s Quality. As for this series, I am just like ‘eh you went so fast’.