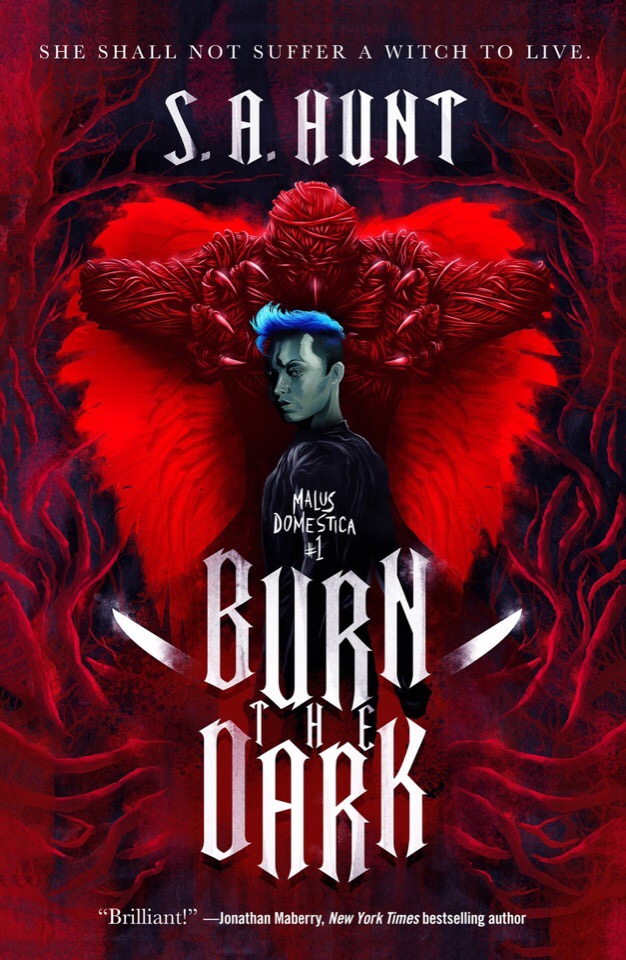 Robin is a YouTube celebrity gone-viral with her intensely-realistic witch hunter series. But even her millions of followers don’t know the truth: her series isn’t fiction.

Her ultimate goal is to seek revenge against the coven of witches who wronged her mother long ago. Returning home to the rural town of Blackfield, Robin meets friends new and old on her quest for justice. But then, a mysterious threat known as the Red Lord interferes with her plans….

Note: This is not YA

Well, Burn the Dark is definitely leaning well enough on the dark part, taking this urban fantasy about a witch-hunter well into horror territory. Robin is a witch-hunter who puts her hunting videos on YouTube as a show, and the monetization bankrolls her travels to different parts of the country to kill witches. Now, she is back in her hometown, five years after her mother was killed, out to get revenge against the witches’ coven that did it. The other main character, Wayne, is a fifth grader who, along with his dad, are the new tenants of Robin’s old house. Wayne has his mother’s ring, through which he can now see doors that act as portals. Robin’s return to the town also stirs up something in her house, something that has also been lurking around Robin since her first witch kill.

The story, for the most part, feels like it is going nowhere in terms of plot. It starts with her first kill, and then jumps 2 years ahead to present day, where she is back in town, and surprisingly reunites with her childhood friend Joel. For a girl bent on revenge, she does nothing to, you know, prepare for the witch hunt. No staking out the witch coven’s house, a house that she used to escape to as a kid, and no recognition of the witches themselves? Most of her story in this book concerns her getting reacquainted with Joel, getting to know Kenway, a veteran-turned-artist who came into town a while ago. Wayne’s PoV has him making friends, getting into trouble when the new group goes exploring the woods for a shortcut, and Wayne finding the magic in his mother’s ring. Their stories don’t cross paths until like the last third of the book, and then the direction of the plot makes sense, and this is where the story picks up, truly, after establishing all this backstory.

The best part of the book, however, may be the horror element – it does those scenes so well, it feels like you are there. The creeping fear of the dark and the unknown is executed brilliantly in some key scenes – like Robin’s nightly bathroom visit interrupted by something supernatural, or Wayne waking through the creepy Dark-House, or, hell, even the oh-no-this-is-going-to-end-bad date that Joel went on. The atmosphere is established well; it is just that the plot takes a while to pick up and go forth in a direction.

Received an advance reader copy in exchange for a fair review from Tor Books, via Edelweiss.

3 thoughts on “ARC Review: Burn the Dark by S.A. Hunt”