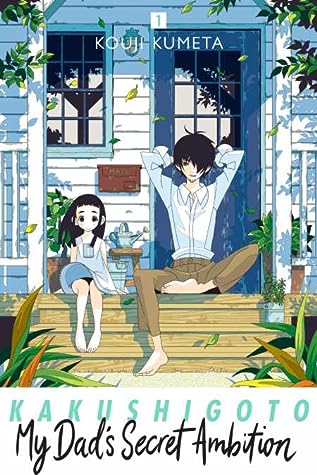 Kakushigoto: My Dad’s Secret Ambition Vol. 1 by Koji Kumeta
My rating: 4 of 5 stars

Kakushi Gotou is a single father with a secret: He’s a top-selling manga artist of a raunchy series that perhaps isn’t suitable reading material for his young daughter, Hime. So he does what any doting father would do—he hides it all from her, no matter the hijinks that ensue!

As the synopsis says, the basic premise of this is a father who is a manga artist hiding his profession from his kid, Hime. When was first published, he used his real name, and since his most famous series involves a lot of NSFW humor, he doesn’t want her life to be affected by his name, so he takes a lot of precautions to keep his professional life away from his home life. He changes from a business suit (Hime thinks he is an office worker) to a casual outfit on the way to his studio, takes care to dissuade her from the general area itself, has even gone as far as to communicate to her teacher that he is hiding his profession (said teacher is also, incidentally, his fan AND has a crush on him), and his league of assistants are trained in emergency drills where they have to prepare for a situation if Hime ever walks into their studio.

The humor is a lit outrageous, but that is because Goto himself is very concerned and goes to worst case scenario at the drop of a hat. His older assistants are used to it, but a new one questions a lot, which is how we get most of the exposition. Along with that, he also relates some of the joys and most of the perils of working in the manga industry, and it also has an entertaining editor character. At home, Goto’s and Hime’s interactions are so adorable – you can see how much he dotes on her, and how much her image of him drives a lot of his decisions. Hime herself is so cute, and while as a kid, doesn’t understand much of what her father fears she might catch on, but she is also mature in a sense. I am not a big fan of the character design (can’t make out anyone’s ages) but I like the clean lines of the artwork and the expressions for the characters, as well as all the ridiculous tid-bits and scenarios!