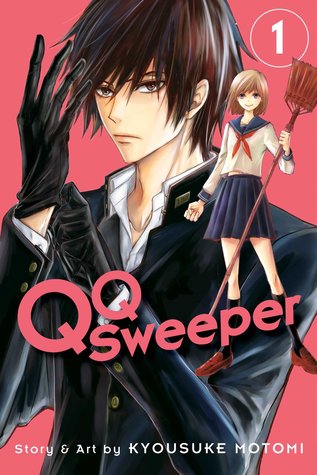 QQ Sweeper, Vol. 1 by Kyousuke Motomi
My rating: 3 of 5 stars

Kyutaro Horikita, the tall, dark and handsome cleaning expert of Kurokado High, is about to meet a sleeping maiden at the school: transfer student Fumi Nishioka! Fumi’s going to learn how to rid the school of nasty spirits with Kyutaro’s help, and her heart will surprisingly be “cleansed” too…!

In the old campus of their school, a mysterious room has a door that beckons Fumi, even though she shouldn’t even be able to see it! Kyutaro goes in after her, but will he be able to save her before she gets devoured by otherworldly creatures?

I was intrigued by the plot involving a group of cleaners that do physical as well as spiritual cleaning, and also I realized after starting Queen’s Quality that it had a prequel, so here I am, reading QQ Sweeper to find out what it is exactly about. Fumi Nishioka is new to town, homeless and has a can-do attitude. She finds an abandoned room on her new school’s campus that she finds very soothing, so she rests there for the night, only to be awoken by Kyutaro Horitaka, who is also part of the school’s Beautification Committee. While his classmates only think of him as the guy obsessed with cleaning, he is actually a part of a family of cleaners who protect bad stuff from taking over people – seems like physical cleanliness is also a part of keeping your body’s spiritual energy unmarred by evil things. Fumi can see the manifestation of the miasma, as well as the doors that the cleaners use, and so she is taken in by the family as a new apprentice.

The comic relief in this series is Fumi herself – who has an image gap of looking like a refined girl, but is absolutely not shy of claiming to look for a rich guy to marry. She also may or may not be who she says, since the principal of her school (and a member of the same cleaning family) is doubtful that she is Fumi Nishioka. This first book has a lot of stuff going on, too, with Fumi’s introduction to ‘cleaning’, her finding her way into a ‘cleaning situation’, her test with Kyutaro’s family to judge her cleaning (regular cleaning) abilities, and finally her first job with them. So far, its main draw is the unusual nature of the supernatural aspect of the story, with the characters entertaining but not so engaging at the moment, and I am waiting to see where it leads.