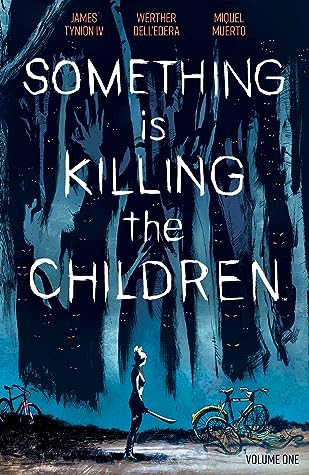 Something is Killing the Children, Vol. 1 by James Tynion IV
My rating: 4 of 5 stars

When children begin to go missing in the town of Archer’s Peak, all hope seems lost until a mysterious woman arrives to reveal that terrifying creatures are behind the chaos – and that she alone will destroy them, no matter the cost.

IT’S THE MONSTERS WHO SHOULD BE AFRAID.

When the children of Archer’s Peak—a sleepy town in the heart of America—begin to go missing, everything seems hopeless. Most children never return, but the ones that do have terrible stories—impossible details of terrifying creatures that live in the shadows. Their only hope of finding and eliminating the threat is the arrival of a mysterious stranger, one who believes the children and claims to be the only one who sees what they can see.

Her name is Erica Slaughter. She kills monsters. That is all she does, and she bears the cost because it must be done.

Collects Something is Killing the Children #1-5.

Well this was a bloodbath – in a small town, suddenly there are cases of children disappearing, and most recently, a group of kids doing some dares on a sleepover all got killed, save for one – James. James is looked at with suspicion by his peers as well as the adults – more so because he isn’t ready to share the gruesome and unbelievable details of the monster that attacked them that night. Going off a rabid bear angle, the authorities are making no headway in the case either – until Erica Slaughter arrives in town. A mysterious and aloof character, Erica approaches James for details, and reluctantly allows him to tag along. But the monster is much more than Erica had been led to believe, and things are getting dicey with an older brother of one of the missing children suspecting her, along with the sheriff’s office.

The coloring scheme of this graphic novel is marvelous – for even a grim setting as this one, the typical Boom studios’ vibrant palette is retained in touches of bright shades against slightly muted colors, like the brilliant green of Erica’s huge eyes, or the nearly fluorescent streaks of blood. The artwork and storyboard bring forward the story in a compelling way, though the many 2-page spreads made things a bit difficult in a digital medium. There is a lot of background information about Erica that is only hinted at, like the symbol that keeps appearing, or the reach of her acquaintance who smooths things over officially. I would love to know more about this enigmatic character, as well as Erica’s backstory, but sadly that will have to wait until future volumes, I guess.

Received an advance reader copy in exchange for a fair review from Boom! Studios, via Edelweiss.