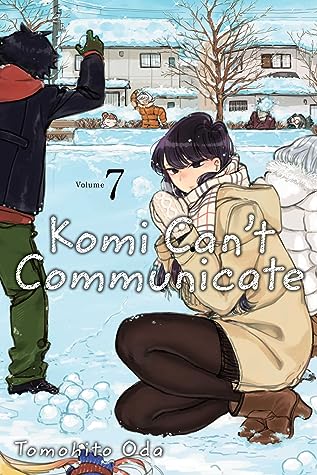 Najimi’s sudden declaration of a Christmas Eve party at Komi’s house sends the friends into a flurry of last-minute gift shopping and Komi into a fit of worrying. But when her friends all turn up with good cheer and a giant stuffed animal for her, it turns out Najimi wasn’t just being impulsive—there’s a special surprise for Komi too!

This cast of characters is honestly too cute! And more so in this book, where Christmas and Komi’s birthday are close. First we have Komi fretting over what gift to buy for the Christmas exchange and she drags her brother along for the shopping trip. Meanwhile, the others are shopping together for gifts for Komi’s birthday and come up with some interesting choices. They decide to pool together their resources and get her a gift together, something which Tadano (of course, he is the only ‘normal’ one in this group) suggests – a giant teddy bear. They are skeptical of the gift, and Komi’s first reaction to it (she freezes because she is welcoming theme to her house for the party) makes them think she didn’t like it, but she really really did. Then there is the seating arrangement at her house – everybody grabs a place thinking they will sit next to her, but instead she sits near Tadano on the floor, so of course everyone is staring daggers at him. Najimi is again the life of the party, smoothing over troubles, creating some – just the usual Najimi.

The next day is a snow day, and they all gather again to have a snowball fight with some elementary school kids in the neighborhood park. You can imagine how well it went to have Komi on the opposing team. The kids are confused by Komi’s silence, but are awed when she delivers them the win. There’s also another snow filled outing where Katai asks Tadano out for ice skating (in the rink at the Red Brick Warehouse, I’m guessing) but Komi tags along, and Katai being Katai misunderstands every action of hers. It’s fun to see the two of them interact, to be honest, because they are so similar yet so different in their social anxiety. Also, when will Tadano realize Komi is crushing on him?