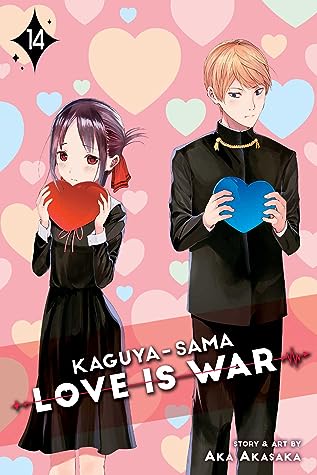 Will it be Miyuki or Kaguya who finally breaks down and confesses their love for the other? Will the love confession be terribly bungled or epically orchestrated? And will the recipient respond appropriately, insanely, or in kind? While these questions will have answers, the romantic quandaries of the rest of the members of the student council will raise a whole new set of questions…

Three months is a long time.

It’s the final day of the festival, and while Chika and her friends are still uncovering the mystery of Arsene, Miyuki has something big planned after he drops the news of his Stanford admission to Kaguya. Kaguya, meanwhile, has been fretting over what to do – with less than a year left (you know what? I am not even going to comment on the timeline of this series. It is too confusing) for him to go, she wonders how to confess her feelings. Ai, relieved to finally have a deadline hastening this long-standing mess, makes a plan for her, but Kaguya’s still-forming plans are not needed, as she realizes what Shirogane has been trying to say. The biggest advancement in this book is that while they don’t exactly say it in words, they do confess their feelings to each other – Shirogane by a grand romantic gesture (and it is described how he made it happen), and Kaguya by kissing him.

The aftermath, though, is still pretty messy. Kaguya is ashamed at having taking such initiative to french kiss him (a move Ai declares too lusty and equal to intercourse – like give me a break *eyeroll*) and when she discusses it with Ai, she only gets more worried about how much she gave in. Also, she agrees to his request to apply for Stanford, which she still has to get her strict father to agree to. Meanwhile, Miyuki is wondering if the intense kiss really meant what it meant, and wants to discuss it with her, but Kaguya has had an, uh, change in personality. These two need to DTR ASAP.

Aside from these two, though, there is another love emerging. Ishigami’s crush on his senior may work out in his favor, as the said girl asks him for time to make her decision; he later on realizes what exactly his actions during the festival meant. His and Iino’s bickering might go in a romantic direction, as the latter starts to show signs of being flustered by him. To tell the truth, I don’t see it working out currently, but who knows how the author might convince me!