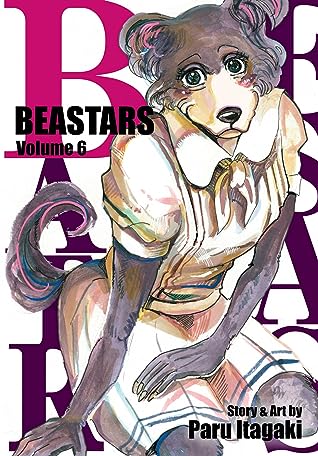 At a high school where the students are literally divided into predators and prey, friendships maintain the fragile peace. Who among them will become a Beastar—a hero destined to lead in a society naturally rife with mistrust?

As gray wolf Legoshi and dwarf rabbit Haru’s relationship intensifies, gray wolf Juno’s jealousy grows. Red deer Louis’s mysterious absence from school has ramifications for both his friends and his enemies. And while the lion gang Shishi-gumi chooses a new leader, Cherryton Academy’s headmaster attends the Council of Living Beings to choose the school’s next Beastar. Plus, a flashback to Legoshi’s and Jack’s puppyhoods and the social engineering following the world war that led to the current fragile truce between carnivores and herbivores.

The previous volume left us on Haru and Legosi in a hotel room, with the latter confessing to him being the one who nearly killed her that one night, because he wanted to clear things out with her before they attempt to have sex. However, even after they clear the air and everything, the divide between herbivore and carnivore interrupts their intentions to have sex. It is a divide that goes beyond just the scandalous nature of an interspecies relationship, but into their instincts as predator and prey. It kinda puts their physical relationship at a standstill, but they remain close emotionally, and Legosi’s obvious attention to her has caused some waves at the school.

Juno, who has a crush on Legosi and confused as to why he would even like Haru, is certain she can beat out a plain-looking herbivore, and makes plans that include both him and her desire to be the Beastar. In the absence of Louis, she is stepping in to fill the power vacuum and with her charismatic personality, and subtle maneuvering of social tides, she has changed the image of the carnivores within the school itself. The other students are also re-evaluating the divide and are letting go of their fear and mistrust, but Legosi remains wary of the image change, but also encourages Juno.

A radical change is seen in Louis, who has already been disillusioned with the apparent power in politics over the whole Shishigumi kidnapping arc. He now returns a harder version of himself, and I was a little surprised where he is at now and what he intends to do, as this change also is about to coincide with the imminent choosing of the Beastar, which he was practically a shoo-in for. I still don’t get why the whole of the animal society has to come together to choose for the position, considering it is not exactly a political position or anything, but I guess we’ll see how powerful the title is, in action, pretty soon.

We also get a glimpse into Legosi’s past through a short story from Jack’s point of view, about how they first became friends as children. While it was pretty cute to see the two of them as kids, the story also adds another brick to the world-building, talking about the existence of cat and dog breeds.

One thought on “ARC Review: BEASTARS, Vol. 6 by Paru Itagaki”