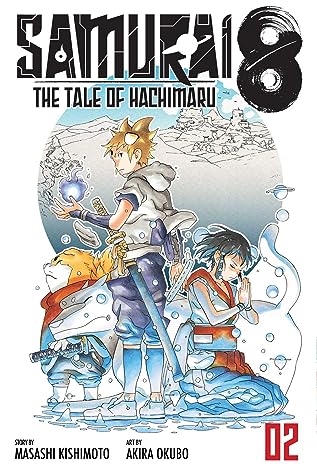 Samurai 8: The Tale of Hachimaru, Vol. 2 by Masashi Kishimoto
My rating: 2.5 of 5 stars

Hachimaru begins his samurai training under Master Daruma and encounters his princess of fate, a girl named Ann. Hachimaru is delighted that he’s found a new source of strength, but things might not go as smoothly as he hopes! And when a new enemy arrives, Hachimaru will face the greatest danger of his life!

Warnings: death of loved ones

My frustration with the first volume made me hesitant to pick up this book, but I had a galley so I thought I might as well read it. This book is considerably better to get through compared to the first, because, while still quite expository, things finally becomes clear. The princess-samurai thing is explained (though I still don’t get the ‘boyfriend’ thing, while I DO get the younger girls swooning over the warriors thing) and the stakes of the story are properly established, as is the prophecy of the key samurai and Hachimaru’s whole role in this story. It finally has me interested in it as a plot, and I think I might continue. Ann and Hachimaru meeting and the relationship established between them gives me hope for something other than an insta-love story, and I would like to see how they go from there. The artwork, though, remains irredeemable in my eyes, with its lack of clarity in objects and figures.

One thought on “ARC Review: Samurai 8: The Tale of Hachimaru, Vol. 2 by Masashi Kishimoto & Akira Okubo”