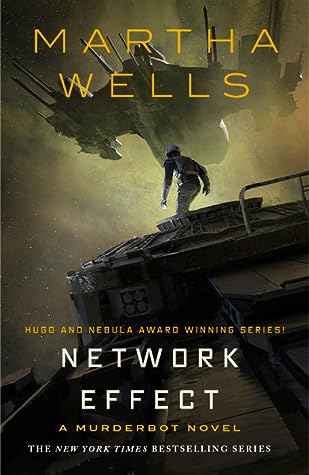 Network Effect by Martha Wells
My rating: 4.5 of 5 stars

You know that feeling when you’re at work, and you’ve had enough of people, and then the boss walks in with yet another job that needs to be done right this second or the world will end, but all you want to do is go home and binge your favorite shows? And you’re a sentient murder machine programmed for destruction? Congratulations, you’re Murderbot.

Come for the pew-pew space battles, stay for the most relatable A.I. you’ll read this century.

I’m usually alone in my head, and that’s where 90 plus percent of my problems are.

When Murderbot’s human associates (not friends, never friends) are captured and another not-friend from its past requires urgent assistance, Murderbot must choose between inertia and drastic action.

Drastic action it is, then.

Having a full-length Murderbot novel is a treat, and this one brings out an extensive tale with abduction, alien remnants, daring rescues and loads of snark. Murderbot’s life in Preservation as a security-for-hire (contracts negotiated by Pin-Lee) are not exactly uneventful as Dr Mensah was a target for GrayCris, but months later, things have quieted down enough that Murderbot accepts a contract to be security aboard a research survey being headed by Dr Arada. A raider attack (which the book opens on spectacularly) has them making an early retreat back, but the moment they are through the wormhole, they are attacked by a transport and an attempt is made at abducting the whole crew; Murderbot and Amena (Mensah’s oldest kid and a teenager) get grabbed, along with some others who get inadvertently pulled in as the transport takes them into another system.

“The good thing about being a construct is that you can’t reproduce and create children to argue with you.”

Said transport has already been boarded by other hostiles and its original crew is missing. As Murderbot works to protect Amena, there are a lot of things that don’t add up, such as who the hostiles are, how their system overwhelmed said transport’s system, and what they want from them. Murderbot once again using all their creative skills in security to stage a takeover, but their problems don’t end there. They are now in Corporation Rim owned space along with corporates, and it means Murderbot has to behave as a different kind of contracted SecUnit at times. The story takes some interesting turns, some expected, some unexpected, and overall delivers one hell of an adventure/mystery plot.

There are still ways to get into heavily shielded systems, or systems with unreadable code, or unfamiliar architecture. I didn’t have a lot of time, so I needed to use the most reliable method: get a dumb human user to access the system for me.

Murderbot is snarky as usual when it comes to protecting its humans, and I loved their dynamic with the people from the PreservationAux crew, as well as the new members of this survey crew. Also, watching them watch Murderbot bicker with a certain transport bot was hilarious! Still, on a serious note, it developed the relationship between them so much – considering how much Murderbot says bots can befriend each other because of the control humans have over them, it was nice to see examples of just the opposite in this book. We also get some additional perspectives from secondary characters – won’t tell you who they are as it is a spoiler but suffice to say, all SecUnits are awkward around humans. There are also a few flashbacks about the intermittent time till the events at the start of the book. I do feel its length could’ve been shortened if we didn’t have explanations for things we already knew from the novellas.

I said, “I am functioning optimally.” (This was a line from Valorous Defenders, which is a great source for things humans and augmented humans think SecUnits say that SecUnits do not actually say.) Overse made an exasperated noise. “I hate that show.”

Overall, it is an exciting space adventure with plenty of engaging action scenes, and an emotional arc that we have been waiting for!